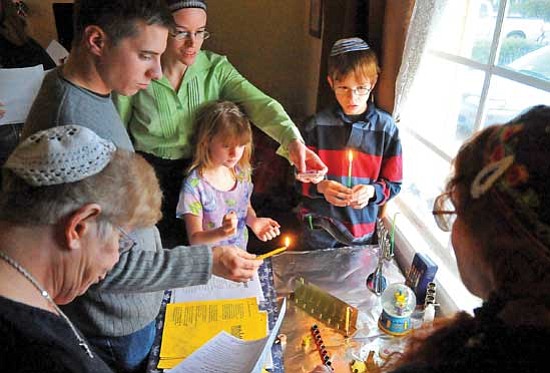 Huddled in front of a spacious living room window as the sun set late Friday afternoon, Eve Zack and Adele Plotkin led a group of nine celebrants in song as they lit four Menorahs on a small covered table to mark the beginning of Hanukkah.

The Menorahs' candles symbolize the "Festival of Lights" - a time when Jews praise God for the religious freedom their ancestors gained thousands of years ago after taking back the Holy Temple in Jerusalem from Greek oppressors.

According to the Talmud, following that victory, there was only enough consecrated olive oil to light the Temple for one day - yet the oil burned for eight days, which was the time it took to prepare and consecrate fresh olive oil.

"This is a celebration of religious freedom - the right of everyone to not be imposed upon by anyone else," said Plotkin, a lay leader for the Beit Torah Jewish congregation based in Prescott Valley. "The idea is to respect each other while being able to do things as we see fit."

For eight days, starting Friday, Jews celebrate their liberation and will ignite candles on each of those days through Saturday. The sacred flames from the Menorah candles represent the celebrants' spirit and the figurative light they shine on the world.

"The idea of lighting the Menorahs near a window is to share with everybody outside the evidence of the miracle (when the temple was lit for eight days with insufficient oil)," Zack said.

Zack, an orthodox Jew who played host to the gathering, introduced her three children - P.J., 11, Mirah, 9, and Raina, 5 - to the true meaning of Hanukkah and all it represents.

Singing songs and reading from Biblical scripture in both Hebrew and English, every person lit two candles stationed in the middle and to the far right of the Menorahs.

"Each of us has a candle," said Plotkin as she guided the ceremony. "For every good deed we do, our light will lead the nation in joy and cooperation."

Afterward, participants sang the hymn "Rock of Ages" and spread out their dreidels - toys that look like spinning tops - for playing games on the Menorah table before moving to the kitchen and igniting the Shabbat candles in honor of the Jewish Sabbath.

As each person lit the Shabbat, he or she cupped their hands and covered their faces and chanted, "Shabbat shalom!"

Prior to blessing and breaking bread, and eating salad, pretzels, peanuts, tuna salad, vegetable soup, fritters, and potato pancakes from the kitchen table, everyone shared a common blessing. They sang the Kiddush - adapted from the first four verses of Genesis Chapter 2 that describes God's rest on the seventh day after the creation - and drank wine or grape juice from a small paper cup.

One of the celebrants, Kevin Holbrook, a 22-year-old senior at Embry-Riddle Aeronautical University, brought his girlfriend, ERAU sophomore Sara Gurnett, 19, to Zack's Prescott home to recognize Hanukkah and the spirit it invokes.

Holbrook, who was raised Jewish, met Plotkin through the Civil Air Patrol and found out about the celebration she helped organize.

Gurnett, a non-denominational Christian, said she is "dating into the Jewish faith."

"I had always celebrated Christmas growing up, but I had a lot of Jewish friends," she said. "People don't get to see the Hanukkah experience first-hand. It's interesting."

When the ceremony wound down, Zack spoke about how she and her children would spend the next 25 hours after sunset at home by themselves - reflecting on their lives without contacting the outside world. With their TV, phone and computer turned off, it afforded them an opportunity to relax, read, play and cherish the company of their nuclear family.

No work. No chores. No distractions. No worries.

"It's a beautiful faith, and it's very meaningful," said Zack, who has been observing Judaism for the past six months. "It has a deep, rich beauty that, when you really get into it, is pretty much everywhere."