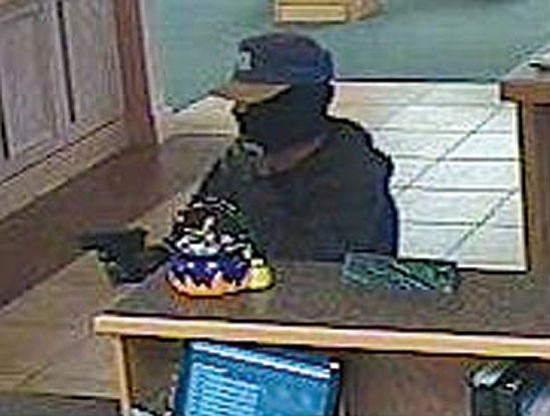 Federal Bureau of Investigation/Courtesy photo<p> Surveillance images show the primary suspect in the robbery of Country Bank in Prescott Valley on Oct. 30 (top); Arizona Central Credit Union in Flagstaff on Oct. 14 (middle); and Compass Bank in Payson on Nov. 25 (bottom).

The FBI needs the public's help to identify the High Country Bandits, an armed two-man crew that robbed three banks in Flagstaff, Prescott Valley and Payson.

During the robberies, one man points a semi-automatic handgun at the teller and demands money, said Manuel Johnson of the Federal Bureau of Investigation. After he gets the money, he orders everyone to lie on the ground, and leaves with a second man.

Authorities say the man with the handgun is white, 20 to 40 years old, about 5'5" to 5'7", with a slight build. He wears dark clothing, gloves, a baseball cap, sunglasses, and a facemask that covers at least the lower half of his face, Johnson said.

They have no description for the second man, Johnson said.

The suspects allegedly robbed the Arizona Central Credit Union at 1948 S. Woodland Village Blvd. in Flagstaff on Oct. 14, the Country Bank at 3044 North Glassford Hill Road in Prescott Valley on Oct. 30, and the Compass Bank at 613 S. Beeline Highway in Payson on Nov. 25.