Major winter storm on its way 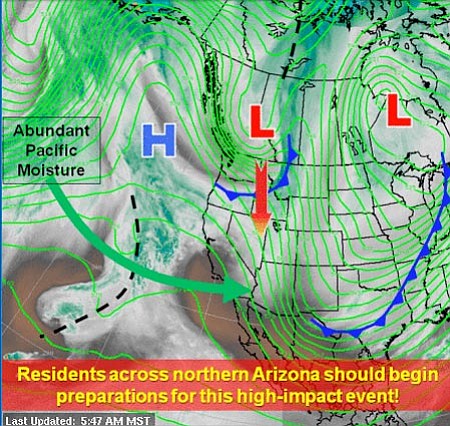 A major winter storm could create treacherous driving conditions across the Southwest Monday and early Tuesday.

The National Weather Service's preliminary forecast is warning people that elevations higher than 6,000 feet could get 1-2 feet of snow, and the snow level could drop to 5,000-5,500 feet. Downtown Prescott's elevation is 5,368 feet. As of Friday, the Weather Service was uncertain whether Prescott would get rain or snow.

Lower elevations in Yavapai County could get as much as two inches of rain.

The storm also could pack wind gusts as strong as 50 mph.

"This storm is certainly going to create hazardous driving conditions in northern Arizona, with possibly blizzard conditions for the high country," said Robert Bohlin, a meteorologist at the National Weather Service office in Flagstaff.

The Arizona Department of Transportation announced Friday that it plans to keep its level of snowplowing on par with last winter, despite drastic budget cuts. ADOT is selling off several hundred vehicles and cutting back on other road maintenance efforts to shift money to snowplowing efforts.

ADOT snow tips and plowing information is available at www.azdot.gov/knowsnow.

"Residents across northern Arizona should begin preparations for this high-impact winter storm," warned the National Weather Service's Flagstaff office website. It urged people to monitor its forecasts at www.wrh.noaa.gov/fgz.

The forecast is calling for a 60 percent chance of precipitation Monday and an 80 percent chance Monday night, with rain turning to snow after 11 p.m. Chances of rain and snow greatly diminish Tuesday.

The storm should affect most of the Southwest and the southern Rockies, Bohlin said.

Chances for precipitation continue throughout the week, as the Weather Service expects another storm track to move into Arizona around Thursday.

The wet weather is something Prescott and the rest of Arizona desperately need as the region continues a decade-long drought.

The southerly shift of the next storm track is consistent with an El Niño influence, climatologists noted Thursday during an online Weather Service briefing about El Niño.

When the equatorial Pacific Ocean warms up more than usual, the Southwestern U.S. gets a higher chance of above-average winter precipitation. Right now it is shaping up to be a moderate El Niño winter, and it could even end up being a strong one, scientists said Thursday.

The last strong El Niño affected Arizona in the winter of 1997-98.