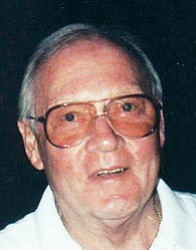 Gordon Smith passed away Sunday, Nov. 29, 2009. He was born Sept. 8, 1929, in Cleveland, Ohio, to his parents, William and Marie (Traite) Gandolf. Gordon was a twin at birth with his brother preceding him in death.

Gordon was a banker for most of his adult life. He moved from Michigan and worked for the Arizona bank Security Pacific and County Bank. Gordon and his brother graduated from the University of Michigan in 1951, where both were members of Alpha Tau Omega. He has a passion for golf, greatly enjoyed gardening and could watch sports for hours on TV. For many years in October, Gordon enjoyed going on The Hunt with his many buddies. Gordon was a Smoki for many years and served on the Prescott City Council. He was a quiet, loving man, respected and cared for by all who knew him.