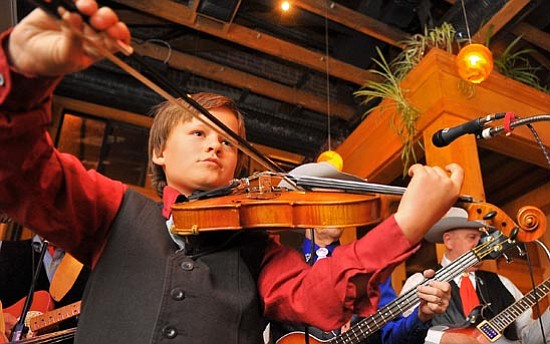 Bix took the stage with The Prescott Playboys country-western swing band. He left after the first set because it was getting close to his bedtime.

"Bix is going to be a great star," guitarist Jerry Johnson said. "Look out, Nashville."

The five-member Playboys band did not hesitate to invite Bix to play with them after they heard him play Ervin T. Rouse's "Orange Blossom Special."

"That's my favorite song," Bix said before going on stage. "It's really fun to play."

Bix is similar to other 12-year-olds, with the exception of his natural music talent. He speaks quietly, smiles a lot, and appears bemused by the attention he gets from the audience.

"He's a good fiddler. He's way ahead of his age," Playboys fiddler Ray Gardner said. "I've never met anyone with that talent at his age."

Gardner, 87, started playing fiddle when he was about 12 years old. The former Mayer schoolteacher has taken Bix under his wing to help him learn country-western swing fiddling.

When Bix is on stage, Gardner steps back. After each song, Bix looks to Gardner for a quick assessment.

"He didn't know country-western swing style music," bandleader Fred Spears said of Bix. "You just look at him and he anticipates what you want. He knows just when to come in and out."

Bix also plays guitar, piano and classical violin. When he plays classical music he is "Johan," and when he plays fiddle he is "Bix," said Moses Glidden, his father. "When he was 3 years old he said he wanted to play a fiddle," said Moses, who is an English teacher at Yavapai College. "We bought him two toy fiddles to start with."

The Playboys formed in 2001 specifically to play country-western swing. The band's repertoire leans heavily toward superstar Bob Wills' honky tonk swing-style music, although they mix their sets with contemporary tunes. The Playboys titled their 2002 CD "A Tribute to Bob Wills."

Charlinda Webster came to the Raven to do some dancing and thinks Bix is "magnificent."

A table-full of Bix's family and friends agree with Webster.

"For sure he'll be famous," said 19-year-old Sunshine Wiesner, a neighbor and friend of the Gliddens. "I wish he would hurry and grow up so we could get married."

"He's lucky his parents are so supportive. When I started playing the fiddle, I got sent to the woodshed because my parents couldn't stand to hear me," said Gardner, who is known for spinning tall tales.

"About a year later, my Ma came by and listened and told Pa that she thought I was good enough to let back in the house."

When Bix plays fiddle, he stands still while his fingers and bow dance across the strings.

"It feels good on stage," he said. "But a lot depends on the people and the place. I like playing with friends."