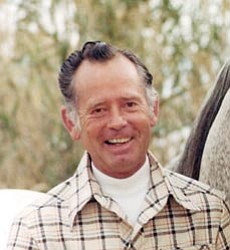 Elmer William Nelson Jr. passed away peacefully and entered into eternal rest on Dec. 1, 2009. He was born in Stanhope, Iowa, on April 2, 1923, to Elmer and Byrdie Nelson Sr. and had five sisters and three brothers who have all preceded him in death.

He graduated from the Stanhope High School in 1940 and attended Waldorf Junior College in Forest City, Iowa. After his graduation in 1942, he enlisted in the Naval Air Corps.

In 1944, he married his high school sweetheart, Marjorie Montgomery. The following spring in 1945, he received his wings and was commissioned an ensign in the United States Navy. He was honorably discharged in 1948.

His opportunity to use his sales ability came in 1958 when he was invited to become sales manager for a new company being formed in Boulder, Colo., called the Elba Corporation. In 1962, the business was moved to Denver and then to Scottsdale, Ariz., in 1969. He retired in 1975.

In Scottsdale, his interest in the thoroughbred racehorse was inspired when he met Hal and Arlyne Clay. After many years of breeding, showing and selling Arabian horses, as well as serving as president of the Arabian Horse Association, his thoughts returned to the thoroughbred racehorse. The first thoroughbred he acquired was a young mare, Road to Luck. That horse still lives in his barn and she is the mother to Lucky Boy Nelson, a horse at the track now. He has lived his dream.