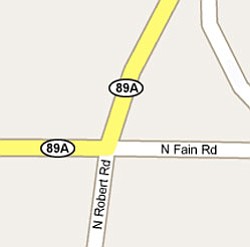 "One car had one passenger who had major head trauma and facial lacerations," said Polacek, who was at the scene. "His face went into the windshield and cut his face really bad."

The other vehicle carried a family of four. Polacek said two children and their mother went to YRMC East via LifeLine ambulance for treatment of minor injuries, while the father, who was driving, was OK.

Bonney and Polacek both said they did not know the cause of the accident, which remains under police investigation.

Officers had to divert traffic off the highway near Robert Road so the helicopter could land safely. They ultimately closed portions of north Robert Road and Fain Road.

"The highway was closed to traffic for a short time before opening back up within a couple hours after the accident," Bonney said.