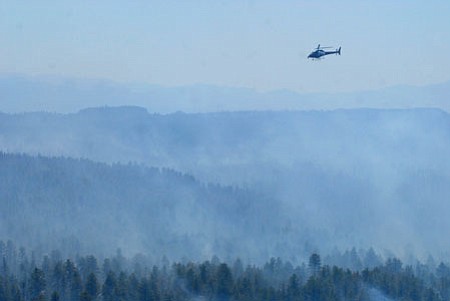 In an August 18 photo, a helicopter flies over the smoke from the Taylor fire near Sycamore Canyon southwest of Flagstaff. Arizona and the western third of New Mexico have seen a lackluster summer rainy season, leading to warmer temperatures and keeping wildfire danger high later in the year than normal.<br> AP Photo/ Arizona Daily Sun, Josh Biggs

By this time of year, Arizona's monsoon normally would have brought temperatures down and moisture up significantly enough to quell any potential for significant wildfires.

But this isn't a normal year. Arizona and the western third of New Mexico have seen a lackluster summer rainy season, leading to warmer temperatures and keeping wildfire danger high later in the year than normal.

The seasonal wind shift known as the monsoon draws moisture into the region from the south and can bring blinding dust storms, strong winds and heavy rain. It officially begins June 15 and ends Sept. 30 and usually soundly snuffs out fire danger by the beginning of August.

But this year, the majority of Arizona has seen between 15 percent to 75 percent of its average rainfall, with the western and Four Corners areas being among the driest, said Rich Naden, a fire weather meteorologist at the Southwest Coordination Center in Albuquerque, N.M.

This year, an average of just 0.33 inches of rain fell at 132 monitoring stations in metropolitan Phoenix between June 15 and Thursday, making it the second driest year since 1999, according to the National Weather Service.

The Phoenix area has seen only one major storm this year, and that was nothing compared to what was going on last year, the 10th wettest ever at Phoenix Sky Harbor International Airport. A storm at the end of August 2008 collapsed a brand-new college football practice facility in Tempe, uprooted hundreds of trees in Tempe and Phoenix, damaged roofs and forced Sky Harbor to briefly shut down.

"It's been drier than normal, no doubt about it," National Weather Service meteorologist Doug Green said.

The unusual weather has allowed a wildfire 20 miles southwest of Flagstaff to grow to 5.4 square miles, or 3,500 acres. Hundreds of firefighters worked to battle the blaze, expected to be fully contained by the end of the weekend, because it was burning out of control and was fairly close to communities.

"This fire is very unusual for August," fire spokesman Bill Watt said. "The dry conditions from the lack of moisture caused this to become a fairly large wild-

No homes were burned and the fire was not expected to grow any larger.

Despite lower moisture and higher temperatures this season, Naden said, the wildfire seasons in Arizona and New Mexico haven't been all that active because of a wetter May and June and because there haven't been many storms with dry lightning.