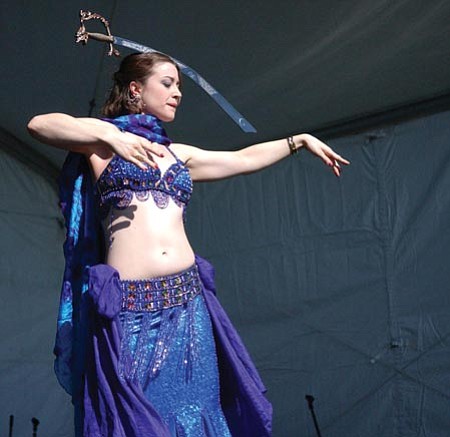 Kelly Soldwedel/<br>The Daily Courier, file<br> "Jeela" from the Black Opal Dance Company performed at a past World Arts Festival at the Civic Center in Prescott Valley. The 2009 event takes place Sept. 12 on the Civic Center grounds.

PRESCOTT VALLEY - The seventh annual World Arts Festival will drop from a weekend to a Saturday this year because of the economy, and will feature new entertainment.

Brian Witty, Prescott Valley parks and recreation director, said the continuing economic slump prompted his department to reduce the festival to one day of activities Sept. 12. He added the town cut the budget for the free festival on the Civic Center grounds from $44,795 in 2008 to $17,775 this year.

The department and the Arts and Culture Commission scheduled a variety of activities and entertainment from 10 a.m. to 7 p.m. The event in the past drew more than 5,000 people in one day, recreation coordinator Roy Jenkins said.

"This is the premier event that the Town of Prescott Valley conducts," Jenkins said.

Parks and Recreation staff hope to create a world record with a first-time activity during the festival: the largest single piece of art that the most number of artists create.

Event organizers are urging residents from 11 a.m. to

1 p.m. to dip their toes, fingers or provided props into pools of nontoxic, washable tempera paint and apply it to a piece of canvas that measures 40 by 60 feet.

Witty said he wants "as many people as we can get" to participate. "We would encourage them to wear clothes they do not care about."

Several people are looking into finding a sponsor for the event, Witty said, adding he plans to take the canvas to the state conference of the Arizona Parks and Recreation Association in 2010.

Witty said the festival this year will feature entertainers from Las Vegas who impersonate Elvis Presley, Elton John and Tina Turner as the grand finale at 5 p.m.

The festival will not repeat the Kinetic Sculpture Race - an offbeat event featuring a variety of contraptions with pedals - because of the ongoing construction of the new library.

Returning acts include Persephone, who will emcee at the main stage beginning at 10:30 a.m. with awards to be presented to the winners of the juried show of the Prescott Valley Arts Guild. Persephone has performed during the sculpture race.

The subsequent acts are Sky Daddy and the Pop Rocks at 1 p.m., Keith Johnson's Caribbean Sounds (and giant stilt walkers) at 2 p.m., Magic of Craig Davis at 3 p.m. and the Yellowbird Indian Dancers at 4 p.m.

Throughout the day, arts, crafts and food vendors will offer their wares, along with a beer garden and wine-tasting venue for adults.

The art guild will conduct a juried show open to all adults from Prescott Valley. Artists will display their work throughout the first floor of the Civic Center with each piece available for sale.

Other activities include a kite-making contest, a make-and-take tent where children can create their works of art and bring them home, an inflatable Jumpy Village, a giant chess contest and mascot kickball.