The good and bad of using few words 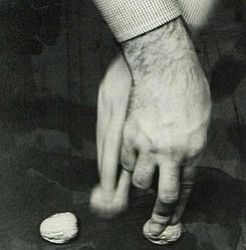 Let's look at what you were looking at the past week.

If statistics are your thing, our most popular day of the week for viewers is Thursday. The most popular viewing time is between 11 a.m. and noon. Stan Musial retired with exactly 1,815 hits at home and 1,815 hits on the road. Best stat ever.

John, you're making entirely too much sense. Quit it, John Malott.

John Malott's a sly one. He out-smarted the bankers and engineers by choosing the correct shell. This, off Indian Hill towers top Prescott council agenda:

After reading all these comments I became concerned, so I went and checked my faucets and phone I but I discovered I still have cell service as well as water, so why do we need bigger tanks and taller towers?

Could John's logic be so delightfully simple? You know what your old physics professor William Buechner used to say, "the simplest explanation is that it doesn't make sense."

Conversely, did you ever wonder what the complete opposite would be like? Where the fewest words were still too many?

No name provided won't understand the following. He posted on Talk of the Town: Elected officials have done enough: "Liberals believe that since there are some problems with our capitalist system, that it must be totally erradicated, especially with regard to health care." These were the first 24 words of the post. That one line bears repeating: "Some problems with our capitalist system."

Nobody move, I'll get the fly swatter. ** rolls up sleeves **

The Council of Academic Advisers calculates that the annual per-year price for health care will more than triple by 2025. (What is the Council? Its Chair, Christina Romer, has a Ph.D from MIT and has authored definitive history on the causes and recovery of The Great Depression; that's all you need to know.) According to the National Coalition on Health Care, 18 percent of the population under the age of 65 was without health insurance in 2007. That's almost one out of five people walking around. And according to the White House, Americans spend more than $2 trillion annually on a health care system that directly causes nearly 1 million people a year to face bankruptcy.

No name, we passed "some problems" back at smallpox. Get with the program.