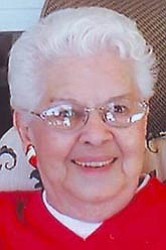 Lucile Margarette (New) Richey, 93, passed away in Prescott, Ariz. on August 3, 2009. Lucile was born in Manson, ID in 1916 to William Henry New and Georgia Marie (Gramer) New. Her family moved to Nebraska when she was very small and she attended a country school in Nickerson, Neb. She attended Nickerson High School for two years and ultimately graduated from Grand Island, Neb. High School in 1934. Lucile was a registered nurse and worked as a surgical nurse in hospitals in Neb., Wash. and Calif. Prior to WWII she married a young sailor, Donald Frank Richey and traveled around the country as a military wife. During the war, Donald served on the U.S.S. New Orleans in the Pacific theater. Lucile and her young son lived with relatives in Fremont, Neb. during those tumultuous years. Following the war, her family moved to Santa Monica, Calif. where they raised her son and a daughter. In later years, after their children were grown, Don and Lucile were fortunate to be able to travel extensively. They visited nearly every state in the Union, including Hawaii and Alaska and visited 14 foreign countries. Lucile was preceded in death by Donald, her loving husband of 60 years.

After spending some years living near her daughter and son-in-law in Bedford, TX and later in Wichita, Kan. she moved to Prescott, Ariz. in 2000 to be near her son and daughter-in-law. She enjoyed living in The Peridot Retirement Home and most recently in the Las Fuentes Retirement Community.

She is survived by a son, Larry Richey of Prescott, Ariz.; a daughter, Linda Russey of Wichita, Kan.; two grandsons, Scott Forsgren of Santa Clara, Calif. and Rob Forsgren of Fort Worth, TX; two grand daughters, Diana Bergman of Oceanside, Calif. and Karen DeSantis of New York; and two great grandsons, Tylor DeSantis of Oceanside, Calif.; and Cory Bergman, now serving in the U. S. Army. Lucie will be interred next to her husband in Colleyville, TX.