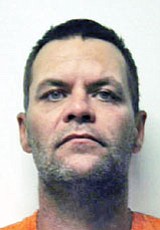 A YCSO news release said deputies talked with the 22-year old victim who said her child's father, 38-year-old Marcus Ferguson, had assaulted her. While she was speaking with Ferguson earlier, he became aggressive and picked up a sliding door section and threw it at her. The door struck her in the back of the head, the release stated.

As she tried to call 9-1-1, Ferguson grabbed the phone from the victim and threw it on the ground. Ferguson then held the victim down on the floor and burned her knee with a lit cigarette before leaving the location.

The victim's 8-month-old baby was in the house during this incident, the release said. The victim received medical attention at the scene.

Several hours later, deputies found Ferguson at a home on Mud Springs Road and arrested him, the relese said.