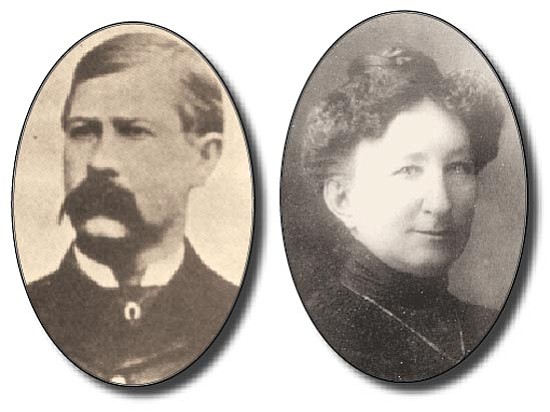 PRESCOTT - Prescott was the favorite home of Virgil Earp, who became an Old West legend alongside his brothers at the shootout near the OK Corral.

"It's the only place that seems like home," Earp wrote about Prescott to his friend and Prescott Constable James Dodson in 1882.

Tucson attorney and historian Robert Palmquist related the story of Virgil and his wife Allie Earp as part of the 50th annual Arizona History Convention in Prescott Friday. Palmquist, Anne Collier and Gary Roberts made up the panel on "The Earps in Prescott." Collier's talk focused on Mary Cummings, aka Big-Nose(d) Kate, and Roberts discussed Doc Holliday's time in Prescott.

Virgil and Allie Earp lived in Prescott in 1877-79 and returned to Prescott and Kirkland in 1895-1902, Palmquist said. It was the most time they spent in any one region together.

Virgil was a lumberman and miner and known as a pretty good shot when he was recruited for a posse chasing down a couple of wild cowboys who were shooting up Prescott's Whiskey Row in 1877. The posse killed one of the cowboys and a coroner's panel exonerated the action.

In contrast, a coroner's panel in Tombstone was basically non-committal about whether the Earps and Doc Holliday were justified in the infamous shootout near the OK Corral, Palmquist related. That's probably one reason why he liked Prescott a lot more than Tombstone, Palmquist theorized.

It wasn't long before Virgil was a deputy county sheriff in Prescott, and then voters elected him constable of Prescott.

When he returned to the region for the second time, he briefly leased the Grizzly Mine before homesteading 160 acres in Kirkland, where he and Allie raised horses, cattle and chickens, Palmquist said.

He quoted a 1901 letter that Virgil wrote to Allie, reminding her of an incident that tickled him, when she broke a broom over a milk cow's head for kicking her.

Doc Holliday and his girlfriend Big Nose(d) Kate, as well as Wyatt and Jim Earp and their wives, met up in Prescott with Virgil shortly before most of them headed to Tombstone in 1879, where Virgil later deputized his brothers and Doc.

Doc and Kate continued to hang out a bit in Prescott first, where the climate was good for Doc's consumption.

Doc seemed to get in a lot of trouble in other places such as Tombstone and Las Vegas, N.M., Roberts related.

So the most interesting fact about his time in Prescott might have been how he managed to stay out of trouble, Roberts said.

Doc tended to choose a favorite saloon for his gambling stints, but no record exists of his favorite hangout in Prescott, Roberts related. Some historical recollections say he had a great run at one of the gambling tables. While he was here, he posed for a formal portrait in 1879.

Doc returned to Prescott for a few months in 1880 and lived in a Montezuma Street boarding house at the same time as two fellows who were quite different from Doc: Richard Elliott, owner of the Occidental Mine and a temperance leader, and John Gosper, secretary of the Arizona Territory who recently divorced.

Since then-Gov. John Frémont wasn't a big fan of Arizona and spent a lot of time away, Gosper was basically the acting governor much of the time, Roberts related.

He especially wondered if Doc knew Gosper well, since Gosper had to deal with the feud down in Tombstone about year later.

Her time with Doc was not to be Big-Nosed Kate's last visit to Prescott.

She ended up spending her last nine years at the Pioneers' Home, and was buried at its cemetery in 1940.

Days Past: The Earps: History versus Hollywood
Days Past: Virgil Earp: Toughest of the Earps!
Earps and friends once walked Whiskey Row
Notorious Old West figures hung out in Prescott
Days Past: Big Nose Kate, an Arizona amazon