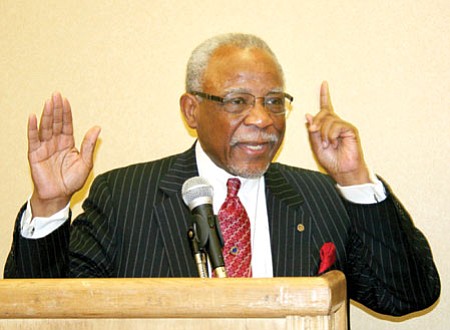 Rev. Dr. Wilson Goode asks for pledges from an audience of church leaders, private citizens and members of Yavapai Big Brothers Big Sisters to do what they can to provide mentors for children with incarcerated parents. Goode spoke at the Prescott Resort on March 18 about a partnership with the Amachi program.<br> Trib Photo/Sue Tone

It took Rev. Dr. Wilson Goode 40 years to acknowledge a painful piece of his past - his father had once been in prison.

"It is even more difficult and challenging for a child these days to say, 'My mother's in jail,'" Goode said to a room full of Big Brothers Big Sisters members, private citizens and church leaders at the Prescott Resort this past month.

Goode, whose sharecropper father spent time in prison, grew up to become the first African American two-term mayor of Philadelphia, and the Deputy Assistant Secretary of the Department of Education under former President Clinton. He earned a doctorate of ministry from Eastern Baptist Theological Seminary and fourteen honorary doctorates.

All that after his high school counselor told him "not to even think about going to college," but instead steered him into factory work.

If it hadn't been for a pastor and the pastor's wife who told him not to listen to the counselor, Goode would have continued working in the tobacco factories of North Carolina and Philadelphia.

With the congregants' financial help, Goode obtained a bachelor's degree from Morgan College, a master's degree from the University of Pennsylvania, and went on to achieve his doctoral degree.

Goode advocates for all children in need, but especially those with incarcerated parents.

There are nearly 100,000 children in Arizona who have one or both parents in federal or state prisons, he added.

In 2005, Goode founded the Amachi program with the help of 450 volunteers through 42 churches and the Big Brothers Big Sisters organization. Amachi is a West African word meaning "Who knows but what God has brought us through this child."

Today, Amachi consists of 359 programs in 210 cities across the United States.

Volunteers commit to working with one child one hour a week for 52 weeks, or two hours a month for 12 months.

"Mentoring works," Goode said, citing statistics reporting that two-thirds of the children in the program improved their school grades, their behavior, and their attendance. He said 90 percent form a lasting and permanent relationship with peers, siblings and with family members.

"Who knows what child in that group of young people will become another George W. Bush or a Barak Obama? What we do know is that 52 hours a week can change the direction of a child's life."

Goode said Arizona ranks No. 18 in high school graduation, and No. 1 in incarceration. Yavapai Big Brothers Big Sisters reports that Yavapai County has almost 1,000 children with incarcerated parents. Statistics show that about 70 percent of these children will end up in jail or prison.

In all European countries combined, there are 1.6 million incarcerated people, Goode said. In the United States alone, there are 2.1 million people.

For more information on the Amachi program, visit www.amachimentoring.org. To find out more about Big Brothers Big Sisters, call 445-5135.