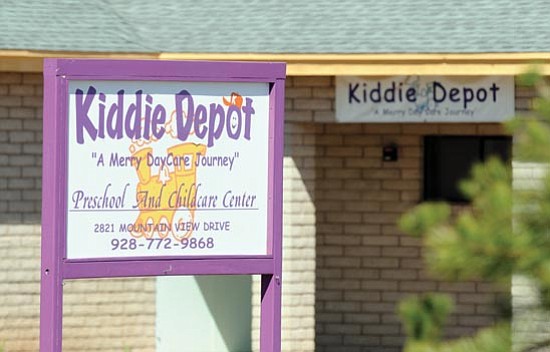 The Arizona Department of Health Services has referred its investigation of Prescott Valley's Kiddie Depot Preschool and Childcare business to its enforcement division for a final determination of what to do in the wake of substantiated findings that employees of the business failed to meet state standards of care.

The determination should take about a week, DHS spokeswoman Laura Oxley said Monday. The state will decide whether to cancel Kiddie Depot's operating license or perhaps work with the daycare center to improve, Oxley explained.

The DHS licensing website lists Kiddie Depot as being operated by First United Pentecostal Church. Officials - including Pastor Richard C. Evans - from the church, which is known as the Praise Center of Prescott Valley, have not returned numerous phone calls asking for comments.

However, an online statement from someone who identified himself as Richard Evans "pastor of the church who owns Kiddie Depot" said "no child was ever hurt at our daycare in any way" and stated that a disgruntled employee "started this mess."

A summary of the state's investigation says that state investigators spoke with seven employees of Kiddie Depot and four of them said they had seen or heard various threats and physical interactions between two of the employees and children at the daycare center.

The incidents witnessed or heard by the four staff members, according to the state's report, include:

• Threats to hit children with a baseball bat and to spank them;

• Poking a child in the chest with a florescent light bulb to keep the child away from a ladder;

• Pushing children down with a foot to force them down;

• Yelling at the children;

• Wrestling a broomstick from a child and then jabbing the child with the stick;

• Jerking the children by the arms; and,

• Witnessing an employee beating a child in the head with a shoe while saying he needed to teach the child a lesson.

Kiddie Depot voluntarily closed its doors at midnight on April 8 one day after the Arizona Department of Economic Security notified the business that it was canceling its contract with the childcare center.

The state found that the Praise Center of Prescott Valley failed to ensure that staff members maintain consistent, reasonable rules and limitations for children's behavior and failed to teach, model and encourage orderly conduct, personal control and age-appropriate behavior.

The state's rules - which the state says the church failed to adhere to - also require that staff members explain to misbehaving children why a particular behavior is not allowed and suggest alternative behaviors.

A third problem with Kiddie Depot was that state rules do not allow childcare workers to use a method of discipline that could "cause harm to the health, safety, or welfare of a child," the summary said.

The fourth and final violation of state rules by Kiddie Depot was the failure to ensure that a staff member does not use or permit corporal punishment, the summary concluded.

After Prescott Valley police turned the results of its investigation into Kiddie Depot over to the Yavapai County Attorney's Office, attorneys there decided not enough evidence existed to prosecute any of the employees criminally.

"We both are using different playbooks," said Bill Hughes, a deputy county attorney. He explained that the county's standard for finding that a person committed an actual crime requires a much higher standard of proof than simply finding that a state rule was broken.

In a hypothetical example, he said, there is a crime of threatening and intimidating, but the legal standard for proving it involves more than just someone hearing you say that you'd like to hit someone with a baseball bat.

Meanwhile, any further action by state investigators may be a moot point, Oxley said. If Kiddie Depot stays closed, she continued, then no children there would be in jeopardy.

Kiddie Depot's sign is gone and its telephone disconnected.