Hundreds chalk it up for festival debut 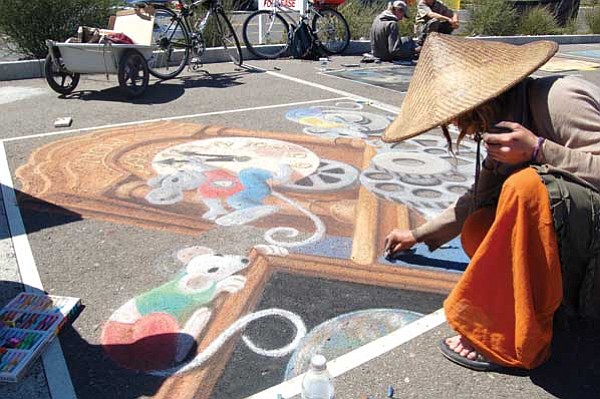 PRESCOTT - Free chalk, foam and space - all it took for the debut of a community art festival that started downtown this past the weekend.

Armed with colored chalk sticks and foam pads, hundreds of participants converged to illustrate the asphalt of the Summit Bank parking lot for the Chalk it Up! chalk art festival Saturday and Sunday.

Organizers estimated 280 attendees signed up for the free event on Saturday, and 50 to 60 more Sunday, attracting hundreds more spectators from 10 a.m. to dusk both days.

"It's fun to see other people checking out the creativity that people in the community can do," said Kelsey Olson, a Prescott High School junior while working on a landscape sketch.

"I think a lot of people looking are having as much fun as the people doing it," said Marta Samuelson, a member of the event's organizing committee.

The event kicked off Saturday morning with artists drawing in about 100 assigned spaces, and grew as the day went on, attracting a range of devotees in ages between 2 and 80, Samuelson said.

Organizers said the event took about a year of planning, inspired by the chalk art festival in Cleveland celebrating its 20th anniversary this year.

With an initial $1,000 grant from the Prescott Arts and Humanities Council and help from local sponsors, they bought supplies and provided the space for free to anyone wanting to participate.

"The hands-on aspect is really significant. It's one thing to just walk around the square. It's another to actually participate. The creativity is fantastic," said Chris Howard, working on an Arizona Cardinals-inspired design.

Howard attended the festival with his three children and a friend of the family.

"They all had such a good time yesterday, they wanted to come back," he said.

Maggie Dewar, a member of the Prescott Mural Projects 'Mural Mice,' paid respects to Earth Day on the largest space of the lot with a cartoon take of the "Hickory Dickory Dock" nursery rhyme.

The design showed mice trying to slow the gears of a clock.

"It kind of represents how much time we have left with our natural resources," she said.