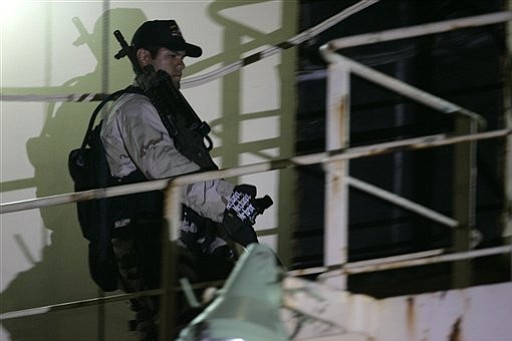 An unidentified armed man is seen on deck of the American ship, the Maersk Alabama, whose captain remains held hostage by Somali pirates, as it arrives in Mombasa, Kenya, guarded by Navy Seals and with the 19 remaining crew members aboard, Saturday April 11 2009. Capt. Richard Phillips is still being held in the lifeboat hundreds of miles from land. U.S. warships are nearby monitoring the situation. The U.S.-flagged ship was attacked by Somali pirates firing automatic weapons Wednesday but its unarmed crew locked themselves in a secure room and then overpowered one of the pirates. (AP Photo / Karel Prinsloo)

It's far past time for the United States to show the world it isn't a victim for every overgrown playground bully.

In the wake of the recent launch of a missile in North Korea and the current Somali pirate hostage crisis, President Barack Obama has been a singular disappointment.

After the Korean missile launch, he called on the United Nations Security Council to act. North Korea obviously broke the rules, but getting the Security Council to do anything meaningful or to enforce it if it did is about as likely as getting a read-out of your account from Bernie Madoff.

This week Somali pirates seized a U.S.-flagged merchant ship, the Maersk-Alabama. The ship was carrying food aid for Somalia and had a predominantly American crew and American officers.

The crew overpowered the pirates aboard the ship and took it back, but not before some of the pirates had taken the captain hostage in a lifeboat, which was running out of fuel as FBI negotiators were pleading with the pirates for the life of Captain Richard Phillips from Massachusetts.

Protecting Phillips' life is paramount, but how the United States handles this can mean the difference between setting an example to discourage attacks on any U.S. ships in the future or issuing an open invitation to try more of them and watch out for the crew.

We have a number of options for ending this thing with Phillips still alive yet showing the pirates we're ticked off and we're not going to take this any more.

U.S. sharpshooters could take out the captors in the boat simultaneously. A submarine could turn loose a crew of Navy SEALS under the boat to capsize it before the pirates knew what hit them. Many other possibilities exist.

Right now, the pirates are taking the shirt off our backs and we appear to the world to be offering them our pants.