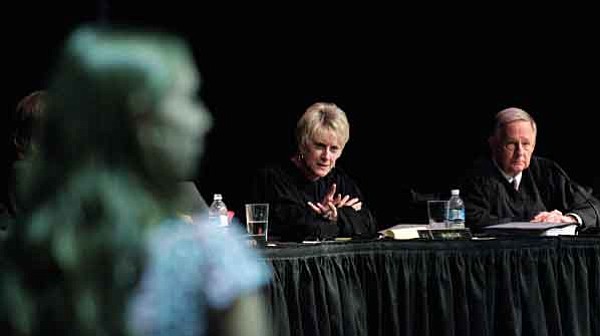 Les Stukenberg/The Daily Courier<br> Chief Justice Ruth McGregor and Justice Michael Ryan of the Arizona Supreme Court respond to questions Thursday during a session of the court at the Glassford Hill Middle School auditorium. The judges heard oral statements from both sides on two cases and answered questions from the gathering of high school students from around Yavapai County.

PRESCOTT - The wheels of justice rolled through the Glassford Hill Middle School auditorium this week.

Students from throughout Yavapai County watched the five justices of the Arizona Supreme Court hear oral arguments for one civil case and one criminal case on Thursday morning.

"This is a great opportunity for ... students to see the court in action ... see the court come to them," Supreme Court Communications Specialist Emily Poland said.

The court hears oral arguments outside of the courthouse four times a year, two at Arizona State University and two outside of Maricopa County, she added.

During the oral arguments, attorneys for the plaintiff and the respondent tried to convince the justices of the merits of their petition. Each side had 20 minutes to present their case. The 20 minutes included the time the justices asked questions of the attorneys. The court will issue an opinion in about two months.

After the oral arguments, the court would typically adjourn to a conference room to discuss the case. Thursday, the court adjourned to the band room.

Before adjourning; however, the justices answered questions from the audience, which included members of the legal community as well as area students.

Justice Andrew Hurwitz explained that the court hears about 50 cases a year. However, it receives about 100 petitions for review a month. State law requires the court to hear death penalty cases.

"As a rule, we select cases that have a statewide interest, a divided decision by the court of appeals or involve a serious injustice," Hurwitz said. "We can only hear so many cases, so we choose ones that pique our interest, such as ones involving the Arizona Constitution or matters of law."

Justice Scott Bales, the newest member of the court, responded to a question about why law is a crowning achievement.

"I think it is amazing to people in other countries that we do follow the law," Chief Justice McGregor said.

The audience was particularly interested in what the justices do outside of the courtroom.

Four out of the five justices said reading is one of the things they like to do for fun. The fifth judge said he enjoys outdoor activities.

The justices do what most people do. They attend sporting events, spend time with their family, enjoy athletic activities and travel.

Chief Justice Ruth McGregor said that while the court has visited Prescott in the past, "this is the first time to hear oral arguments in Prescott Valley."

Bringing the Supreme Court to Yavapai County is not an easy task. In addition to the justices, the entire court personnel traveled to GHMS.

"We are known as a 'hot' court. Not because of the way we look, but because we are active in questioning attorneys during oral arguments," Hurwitz said.