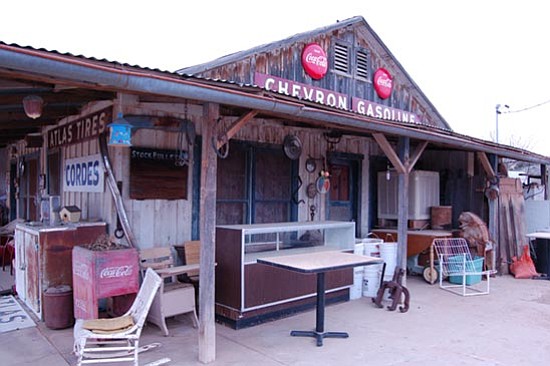 History is alive across so much of Yavapai County that it's not easy to choose the best loop tour.

But for some of the best and most accessible views of impressive Old West structures, we'd have to recommend a loop drive through Old Cordes, Cleator, Crown King and Palace Station.

All four of these stops feature 1800s-era structures as well as modern-day residents, so one cannot label them ghost towns. And they all are located on private property, so please respect the owners' privacy unless you're visiting a public business.

If you value these rare remaining Old West towns, learn about how some of them are endangered by an expansion of Interstate 17 by visiting www.savebumblebee.org.

Much of the loop tour is possible in a passenger car in dry weather, even though most of it is on dirt roads.

However, we advise at least a high-clearance vehicle for the last leg on Senator Highway (Forest Road 52) through the Prescott National Forest from Crown King to Palace Station to Prescott. And with the good winter precipitation this year, it's best to check with the Forest Service (443-8000) to see if the road is relatively dry.

The routes have pretty good signs, but watch the signs closely or your vehicle could end up in a nasty place.

It's also best to bring along maps, including a Prescott National Forest map. We also advise back-up maps such as a recreational road atlas. We recently discovered a guide called "4 Wheel Drive & Back Roads of Yavapai County, Arizona" by Luis and Paula Vega at the Worm Bookstore on Whiskey Row, and it's a helpful thing to bring along.

Remember that road names on the maps sometimes don't match the road names on site. The signs generally point to the towns so follow their lead.

• From the intersection of highways 69 and 89 in Prescott, drive 27.8 miles (by our odometer) southeast on Highway 69 to Mayer and the right-hand (south) turn that leads to the back road to Old Cordes. The turn is the first right after the signed turn to Main Street. A "T" intersection is less than 100 feet away, with a sign pointing left to Cordes (7 miles), Cleator (15 miles) and Crown King (29 miles). It's signed as County Road 179/Antelope Creek Road.

• Where the road splits at mile 33, follow the sign to Crown King and hang to the right.

• Old Cordes is at mile 35.5. The great-great-granddaughter of the town's namesake, Cathy Cordes, operates a delightful store filled with antiques and collectibles. It's open only on weekend days. The original Antelope Station stage stop and saloon is directly across the street. John Henry Cordes purchased it in 1883 after a drunken customer murdered the previous owner. Like other buildings in town, it is a residence now and not open to the public.

• Continue south toward Crown King (CR73 to the east connects to Interstate 17 at the Bloody Basin interchange).

• This road ends at mile 39.5 at a "T" intersection with CR59. Turn right (west) toward Crown King (Bumblebee, another historic stage stop, is to the southeast). After this turn, the road starts to get more winding and hilly.

• At mile 41.2 and the Turkey Creek one-lane bridge crossing, the old Golden Turkey and Golden Belt mines are visible to the left. The Prescott National Forest recently cleaned up the massive tailings here. Ignorant vandals also recently torched the historic home and office of the mine manager.

• Cleator is at mile 43.6. The Cleator Bar is open on weekends. If it's open, you should visit Dave. He also serves non-alcoholic drinks. The large old stone structure in town is a former schoolhouse. Several other buildings are now residences.

• West of Cleator, the road really gets interesting. It climbs the southern Bradshaw Mountains on an old railroad bed. Drive slowly and watch for others who don't. We advise people not to go up this road on late Sunday afternoon when the weekend warriors are returning home to the Valley of the Sun, especially during the summer. At times, the road is only one lane wide.

• Crown King is about

13 miles above Cleator. The landscape seems to suddenly change from Sonoran Desert to ponderosa pine forest as one crosses the "Magic Bridge" just outside town. As you pass the Mill restaurant on the hill to the left, watch for the right-hand turn across another bridge that leads to the downtown businesses, which are visible from the intersection.

Crown King features a general store and several lodging facilities, including the old prostitute cribs on the second floor of the Crown King Saloon that people somehow moved down here from another mining town when that mine played out. The Mill and the Crown King Saloon both have restaurants. Stop in the saloon and meet some of the great characters who live in this town, where the homes dot the mountainsides above main street.

Numerous side roads lead to old mines as well as Horsethief Basin where the Prescott National Forest operates campgrounds. Some of these roads are really rough, such as the one that leads south all the way to Lake Pleasant.

Some people camp on the national forest within walking distance of businesses. These undeveloped campsites are visible next to roads in several directions.

Visit www.crownking.com on the Internet to learn more about this historic community and some of its quirky events, such as Crown King's version of a golf tourney.

• To head back north about 32 miles to Prescott from downtown Crown King, go back over the bridge to the "T" intersection and turn right toward Horsethief Basin. Within about a mile, turn right again onto CR52 (Senator Highway).

• Just a few miles up CR52, watch for the Bradshaw City historic sign on the left. With only a few foundations remaining at this 1870s-era gold boomtown, it's hard to believe that about 5,000 people once lived here.

• After about 22 miles, the historic Palace Station is on the left. Read the historic sign and pamphlet, but do not go inside; Forest Service caretakers live here. Along with the stagecoach stops at Old Cordes and Bumblebee, this is one of the last remaining stage stops in Arizona. It dates to 1877.

• Along the rest of the drive, watch for remnants of old mines such as the Senator mine above the Hassayampa.

• Senator Highway becomes Mt. Vernon Avenue in Prescott and connects to Gurley Street. North of Palace Station, some relatively good side roads to the right connect to Mayer, Poland Junction and Walker.