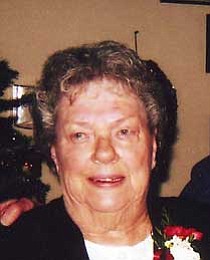 Virginia met Ted, the love of her life, and they were married on Dec. 28, 1947. Virginia and Ted lived in Haverhill, Mass., until 1961, when they moved to Southern California. In 1991, they retired to Prescott, Ariz. Virginia retired from Kmart in Temple City, Calif., as a supervisor after 10 years of service. Virginia enjoyed knitting, crocheting and trips to Laughlin. Virginia was an excellent cook, and enjoyed large family gatherings.

Virginia is survived by her beloved husband of 60 years, Theodore Brown; daughters Donna Maldonado of Hemet, Calif., Patricia (Wayne) Mclntire of La Verne, Calif., Linda Brown of Littleton, Colo., and Marie (Rick) Hernandez of Prescott Valley; 11 grandchildren; 11 great-grandchildren; and numerous nieces and nephews. Two brothers and one sister, all of Massachusetts, also survive her. She is preceded in death by her parents, brother Charles H. Greene Jr. and grandson Christopher Skipwith.

Sunrise Funeral Home in Prescott Valley. Mass will be 9 a.m. Saturday, Sept. 13, 2008, at Saint Germaine's Church. Graveside services will follow at Heritage Memorial Park in Dewey, Ariz. In lieu of flowers, the family request donations may be made to Granite Mountain Home Care and Hospice in Prescott, Ariz.