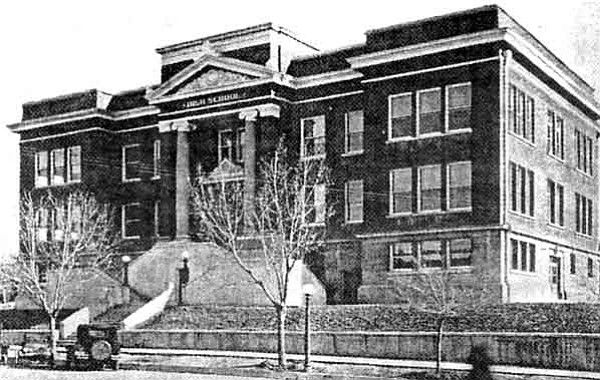 PRESCOTT - Hazel Deming is a member of the Prescott High School Class of 1929.

When the Prescott High School marching band entered Prescott Resort playing the school fight song Sept. 5, she and more than 500 other PHS alumni rose to their feet.

It was an impressive moment considering the alumni are members of the PHS Half-Century Club.

All the alumni attending Friday's luncheon graduated from PHS at least 50 years ago.

"This is wonderful," Deming said, referring to Friday's luncheon. "I guess I am the oldest living graduate here."

Deming lives in Granite Dells. She was born in Tucson, where her father was a cotton farmer. The family moved to Prescott when Deming was nine, and she has lived here ever since.

Luncheon committee co-chair Kathy Pessin said that in addition to being the oldest graduate attending the luncheon, Deming could also be the oldest living PHS graduate.

Recognizing Deming was the only bit of reunion tradition the organizers enacted.

"Everyone just wants to visit. They are not interested in a program. So, we have the band, make a few announcements, eat and visit," Pessin said.

The PHS Half-Century Club also donates money to the high school for a scholarship. In 2007, the club donated $7,000. This year, the poor economy has reduced that amount, but committee members estimated the amount at about $6,000.

Luncheon co-chair Bert Schoneberger credited an anonymous donation for increasing the amount of the scholarship money.

"All I can say is that the money apparently came from a group known as the Prescott Mafia," Schoneberger laughed.

At that, the cheers from a few tables made it easy to identify where the "Prescott Mafia" was located.

Fred Ward, Class of 1950, said the Prescott Mafia is a group of graduates that started to get together about 30 years ago. He said they would meet every few months or so for lunch.

Ward said the secretary of one of the founding members would always refer to the group as the Prescott Mafia - and the name stuck.

"Anyone who is a graduate of Prescott High School is welcome. We meet four times a year, twice in Prescott and twice in the Valley, for lunch," Ward said.

The only cost, Ward said, is the price of lunch.

"We try to raise money for the scholarship. So we meet and eat, and when the bill comes we divide it among us, and anything extra goes to the scholarship," Ward said.

He said the group is actively recruiting new, younger members.

"The thing about class reunions," Ward said, "is the first 15 minutes people try to act cool and sophisticated. After 15 minutes, they revert to what they have always been - if they were loud before, they are loud now. If they were shy then, they are shy now."

Schoneberger said the Half-Century Club began in 1978 when a group of PHS graduates met at someone's house.

The club has grown so big that a steering committee is now in charge.

People came from California, Utah, Florida, Alaska and Hawaii to attend the 2008 luncheon.

Henderson taught band and orchestra from 1949 to 1979. He still lives in Prescott.

Henderson said he recognized many of his former students at the luncheon.

"For 25 of the 28 years I taught at PHS, the instrumental groups received superior ratings at state competitions," Henderson said.

Burns taught in the public school system, then he was a founding faculty member at Yavapai College. He retired in 1985.

"This is wonderful. I attend most of the class reunions. I know a lot of people," Burns said.

Rowley was the shop teacher for 41 years. He taught ninth grade for 20 years and then moved on the middle school. He also taught physical education, and coached football, basketball and track.

As the PHS Marching Band prepared to march in, Director Dan Bradstreet said, "This is the best audience we have all year. When we play the fight song and see how there people react, there are a lot of goose-pimples."