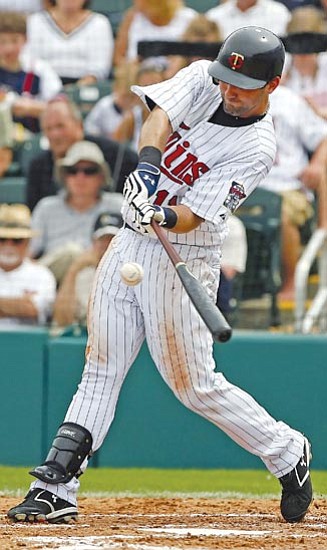 The Daily Courier
Originally Published: September 3, 2008 6:21 p.m.
Tweet
Former Prescott High School baseball star Jason Pridie made his big league debut Wednesday night, collecting his first run, his first walk - and his first error.The 2002 PHS graduate, who has enjoyed a successful minor league career since the Tampa Bay Rays drafted him in the second round out of high school, made his first appearance with the Minnesota Twins who acquired him in a trade in November of 2007.A September call-up who joined the club at Rogers Centre in Toronto on Tuesday, Pridie came on with one out in the top of the seventh as a pinch-runner for Delmon Young who had delivered a pinch-hit single. Later in the inning, with two outs and the bases loaded with Pridie on second, Twins catcher Joe Mauer lined a bases-clearing double that gave Minnesota a 3-2 lead. Pridie scored the tying run.Pridie remained in the game in right field in the bottom half of the seventh.His first at-bat came in the eighth. With two outs and Nick Punto on first, Pridie was the fourth Twins batter to come to the plate against left-handed Toronto reliever Scott Downs. The left-handed batting Pridie worked a full-count walk, but the inning ended a batter later when Denard Span grounded out to Downs.Pridie had a rough go defensively in the ninth inning.Still in right field with two outs and Minnesota clinging to a 4-3 lead, Pridie charged a single hit by the Blue Jays' Travis Snider. While reaching down to field the base hit, the ball booted off Pridie's glove and ricocheted into center field. The miscue allowed Curtis Thigpen - on first base pinch-running for Gregg Zaun - to score the tying run against Twins closer Joe Nathan and send the game into extra innings."I'm not going to say it's just because it's my first day," Pridie told The Associated Press afterward. "I know I'm a better defender than that."Pridie got another chance at the plate in the top of the 10th.With no outs and Matt Tolbert on first in a tie ballgame, Pridie - batting in the 9-hole - laid down a sacrifice bunt to advance Tolbert to second. With the successful bunt and the eighth-inning base on balls, Pridie has yet to record an official major league at-bat.He made two put-outs in right field in the bottom of the 10th to push the game into the 11th inning, still tied at 4-4. That's when Toronto ended matters when John McDonald lined a walk-off single to deep center with no outs off Twins reliever Boof Bonser to score Scott Rolen and clinch the Jays' 5-4 win.The win marked Toronto's eighth straight victory over the Twins who lost for the eighth time in 11 games and dropped to 5-8 with one game remaining on its 14-game road trip. They fell one game behind the Chicago White Sox in the AL Central.Minnesota stranded 13 runners and matched a season high with three errors, including two that led to Toronto runs."We missed too many plays, bobbled too many balls and kept giving them opportunities," manager Ron Gardenhire said.Even as the pressure mounts, the Twins remain upbeat. The clubhouse stereo blasted Bob Marley after the game as backup catcher Mike Redmond threw a consoling arm around Pridie, whose ninth-inning error allowed Toronto to tie it.Pridie, who wore #11, is the first area product to make his major league debut since Chino Valley High School graduate Andy Pratt first pitched for the Atlanta Braves on Sept. 28, 2002. Other past area products rumored to be among the potential September call-ups include Dusty Brown, who prepped at both Bradshaw Mountain and Yavapai College, with the Boston Red Sox, and a pair of former Roughriders in the San Diego Padres' chain, Kyle Blanks and Gabe DeHoyas.(The Associated Press contributed to this report)
Contact
Sign up for Courier e-News Alerts
Most Read
7 days
30 days