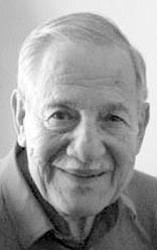 He resided for over 60 years in Prescott, Ariz. where he graduated from St. Joseph's Academy and later Lamson Business College. A Naval Veteran, Paul served as an AMM2 in WWII. Following his military service, Paul began a long career in public service in Prescott and served as Yavapai County Treasurer for 30 years. Paul was involved in the Prescott Elks Lodge, Knights of Columbus and the Veteran's organizations, VFW, American Legion and DAV. He was also an active member of Sacred Heart Catholic Church. A life-long St. Louis Cardinals fan, Paul will be remembered for his sense of humor, making friends with every stranger along the way and as a loving husband, father, brother and grandpa.

A memorial mass will be 10:30 a.m. Monday, Nov. 3, 2008 at St. Andrew of the Apostle Catholic Church, 3450 W. Ray Road, Chandler, Ariz. Interment will follow at a later date at the Veterans Memorial Cemetery in Prescott.