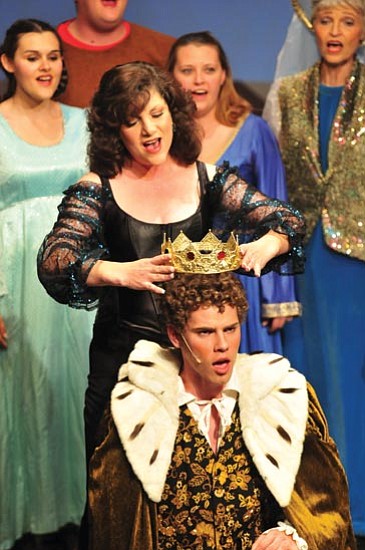 Sex...lights...magic and other elements audiences await in the Prescott Fine Arts new production of the musical "Pippen."

Yavapai College drama instructor Bruce Lanning, who directed last season's "All My Sons" and "The Pajama Game" at PFAA, brings the long running Broadway show to the local stage with some of the naughtiness introduced by original Broadway director Bob Fosse, but lighter in tone as originally conceived by original music and lyric writer, Steven Schwartz.

A morality play set in medieval society, the character of Pippen returns from college to his father's kingdom somewhere in the Holy Roman Empire.

Feeling a little estranged from his father, King Charles (Ron Lipps), who appears to value power over education, Pippen embarks on a quest to find meaning to his life.

Jake d'Armand, one of Lanning's drama students and debuting as a lead role in this show, plays the world weary Pippen who fails in a variety of pursuits.

He follows his battle-happy stepbrother, Lewis (Scott Godsil) into a war that bears no gratification, seeks solace in women and sex that leaves him empty, tries politics to no avail, and finds a woman to love (Sarah Elliot) but fears the relationship will trap him.

Backed by a live musical ensemble, funky numbers like "War is a Science" and "Morning Glow" imbues the show with a vibe of the 70's.

Comedy and music intertwine in numbers like "Glory," where a mock battle plays out with a top hat and cane jazz routine amidst flailing limbs.

Kimberly Neill reveals an extensive background in musical theater as The Leading Player, a song-and-dance character who guides Pippen through his various pursuits.

A long-time fan of the show, Fanning said he tried to cast "Pippen" 15 years ago for a Cleveland theater, but couldn't effectively cast the roles of The Leading Player and Pippen, acknowledging that 15 years ago, he wouldn't have thought of casting a woman in the role, played on Broadway by Ben Vereen.

"She's got just a wonderful voice. She's has kind of a little strange voice, but it's powerful, and it's just right as The Leading Player," he said, noting that d'Armand handles the lead quite well for an actor not accustomed to musical theater.

Lanning said Schartz's exploration of the problems of war, sex, revolution and work and the value of human relationships make the play relevant to current society just as when he introduced it in the early 70's.

"It's a play that kind of fits now. Though I wish there was a part about financial stability," he said.