PV council approves rezone of 230 acres to industrial use 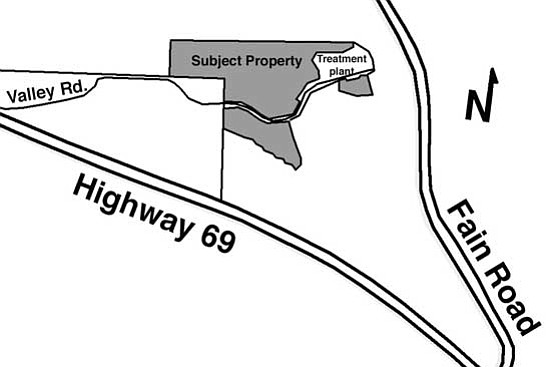 The Daily Courier<p> The subject property is 230 acres on both sides of Valley Road from Mendecino Drive to Fain Road.

PRESCOTT VALLEY - The Fain family business interests gained tentative approval Thursday from the Town Council to rezone 230 acres on both sides of Valley Road from Mendecino Drive to Fain Road on the east from residential to industrial.

The council voted 5-0 to introduce an ordinance to rezone the recently annexed land. Councilwomen Lora Lee Nye and Mary Baker were absent.

Town ordinance requires the council to make a second reading before the rezoning becomes official.

The council extended the town's boundaries to include the land, which the Fain companies want for expanding future industrial development in an area that includes the Hensley, Ace Hardware and Canyon distribution businesses, according to landscape architect Peter Bourgois. He represented the Fain businesses at the public hearing.

Bourgois said the Fain businesses envision an auto recycler on 26 acres that the council rezoned for heavy industrial. The council voted to rezone the remaining 204 acres light to medium industrial.

Since the entire property is within a planned area development, any proposed project requires a final development plan, explained Bourgois, who is with BMA Architects, Planners & Landscape Architects in Prescott Valley.

In other actions, the council introduced an ordinance allowing Viewpoint Investors LLC to build a mini-storage business on 5.2 acres north of Highway 89A and south of the Viewpoint subdivision. The company applied to rezone the property from residential services to minor industrial.

The mini-storage business will not illuminate adjoining property, Parker said.

"That thing is going to be pitch dark at night," applicant Tim Gelatka said. He is partners with former state Senate President Ken Bennett and Jason Miller in the LLC.

Gelatka also told the council that no more than 11 vehicles would visit the mini-storage business a day.

• The council approved a resolution allowing employees to work in other departments at lateral or lower-level jobs on a temporary basis to relieve heavy workloads. Human Resources Director Danielle Bowman proposed the policy to make better use of a staff that is 7 percent smaller than a year ago.

• The council introduced three ordinances to comply with the Legal Arizona Workers Act, also known as the employer sanctions law, that requires employers to verify the legal status of employees before hiring them.

• The council conducted a public hearing on the so-called "home rule" option, which requires a popular vote before the council may establish spending limits in the town budget over the following four years. The voters will decide the measure this coming March.

• The council approved an agreement with the Arizona Department of Transportation to finance a proposed 5,000 foot path for walking, bike riding and other nonmotorized travel from Lake Valley Elementary School to the new public library currently under construction and the Civic Center. The town will match $30,223 of the $500,000 ADOT is getting through a grant.