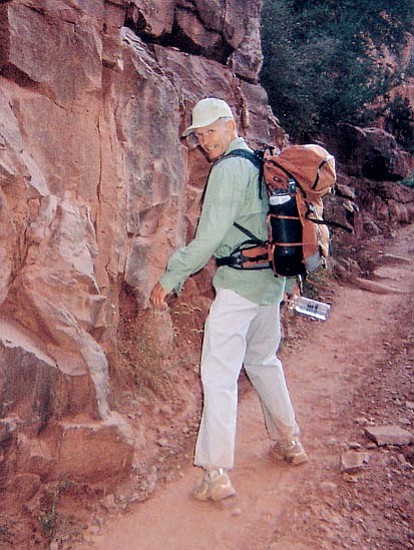 Courtesy photo Bill Kathan hiked the Grand Canyon – from rim to rim – going backwards, with his head turned to the side.

The sight was so strange that it stopped Grand Canyon hikers in their tracks.

For 15 hours, and under the searing September sun, Prescott resident Bill Kathan made the trek from one rim of the canyon to the other.

But he didn't do it the easy way, if such a way exists. Rather, the 56-year-old fitness fanatic hiked the entire 24-mile trek backwards.

Arduous by any standards, the hike, which includes a 6,000-foot total elevation change, became a war of wills for Kathan.

With his head turned to the side to get a view of the twisting trail, Kathan said he often became dizzy and ultimately experienced dry heaves and stomach pains. He also tripped over logs, and worried about stepping on snakes.

But he was determined to finish the feat, which he says set a world record.

"Why the Grand Canyon?" he asked. "I checked up on it, and I see that nobody else has attempted walking it backwards. I thought it would be something different."

Kathan is big on world records. He claims to have set 35 to 40 of them in his life - everything from doing 5,671 jumping jacks in one hour to walking backwards across the country.

But none of the records quite prepared him for the rigors of the Grand Canyon.

"It was tougher than what we expected," Kathan said a few weeks after the hike. "It was one of the hardest records I have ever attempted. I'm just recovering now. It took a lot out of me."

And plenty of people in the canyon noticed.

Kathan said many people stopped him to take pictures and ask questions.

"They were all just interested - Europeans, Chinese, Americans," he said.

Adam Batchelor of Homestead, Fla., was among the scores of people who talked to Kathan along the way.

When Batchelor and his friend Fred Johnson saw Kathan approaching, they say they both watched with disbelief.

For Batchelor, the first thought was, "You've got to be kidding me." Johnson said he took out his video camera, thinking, "Surely, you can't be serious."

"I have been taking a road trip around the states with my friend Fred for the past six weeks, and have been collecting some crazy stories along the way," Batchelor said. "This was definitely one to pass on."

Melissa Christopherson of Washington, D.C., said she and her husband saw Kathan a couple of times on their hike in and out of the canyon.

During a break, the couple chatted with Kathan and his videographer Benjamin Kastelic for a time before continuing on.

"Bill appeared tired and told us that he was determined to make it to the South Rim that night," said Christopherson, who later saw Kathan walking on the corkscrew section of the Bright Angel Trail.

Kathan, who moved to Prescott from the East Coast about seven months ago, said his interest in fitness records stems from a desire to be a good example for young people.

"Records help me correspond with kids," he said.

The father of an 11-year-old girl, Kathan said he cares deeply about teaching kids the benefits of having a good attitude.

For years, Kathan worked as a dairy farmer in Vermont, and also was a dancer in his younger years - both of which helped with his coordination and athleticism, he says.

To document the Grand Canyon trek, Kastelic, also a Prescott resident, did the hike with Kathan and videotaped and photographed it. He also occasionally warned Kathan about getting too close to the steep ledges of the canyon.

Kathan said he is submitting his record to the Guinness World Records and to Ripley's Believe It or Not.