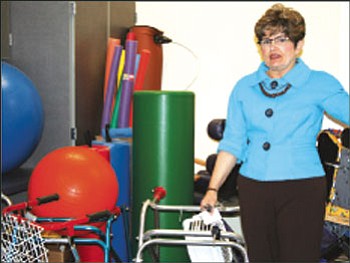 Special Services Director Kay Turner stands near equipment in the physical therapy classroom that preschoolers in the Bright Futures program will use at the BMHS east campus starting Monday.<br> <i>Trib Photo/Sue Tone</i>

The Humboldt Unified School District found another use for the Bradshaw Mountain High School East campus - relocate the Bright Futures program for preschoolers from their older modular buildings on the Liberty Traditional School to the newer east campus.

The preschoolers will share the campus with older students in the district's alternative programs, prompting calls from parents this week concerned about the safety of their young children.

"Safety of students is our first priority and we have absolutely no concerns about these students' safety," said Mariela Bean, HUSD public relations director.

Workers are making changes in the east campus classroom building to maintain two separate areas and alleviate any apprehension parents may have about the move.

The preschoolers' classrooms and playground area remains behind a gated locked area in a separate wing of the classroom building. They have a bus and parent drop-off and pick-up zone at the front of their classrooms by the gate, while the older students' buses will continue to use the area at the back of the building. Each group of students will use separate restrooms.

Workers removed the boulders in the center grassy area of the preschool wing, and put down a layer of sand at one side that will contain playground equipment. A wide sidewalk around the perimeter will make a perfect "roadway" for tricycles, said Special Services Director Kay Turner.

The preschoolers' restrooms already have low toilets, and workers will build a step up to the sinks.

"This was shared between the district and other contributors," he said. Those contributors include N.L. Booth and Son, Inc., and some of the sub-contractors on B Bond projects, he said.

The 76 preschoolers all qualify for the Bright Futures program based on special needs in five developmental areas: speech and language, cognitive, adaptive, social and emotional, and physical, Turner said. The students, aged 3-5 years, attend half days on Tuesdays through Thursdays. Teachers and therapists use Mondays and Fridays for home visits, evaluations, screenings and Individual Education Plan meetings, she said.

Remaining at the east campus are high school students enrolled in the Alternative Education Program (16-21 year olds working to recapture credits), a GED prep program, Special Education Alternative School (two students in the morning program, two in the afternoon, under tight supervision with a 1:1 student-adult ratio), and the In School Suspension Program.

The preschoolers' classrooms are on the lower level of one wing of the two-story building. Upstairs are therapists' offices, a substation for the Prescott Valley Police Department, and a satellite office for a juvenile probation officer. The JPO has no students on his caseload who attend the east campus, Rowe said.

Ken Johnson, HUSD project manager, said workers will begin demolishing the old modulars on the LTS campus this coming week in preparation for construction on the new multi-use building.

With the move of Bright Futures to BMHS-East, Schmitt said the campus is now known as HUSD Education Center. He would like to expand the special needs preschool to include typical students as a fee-based program next year.