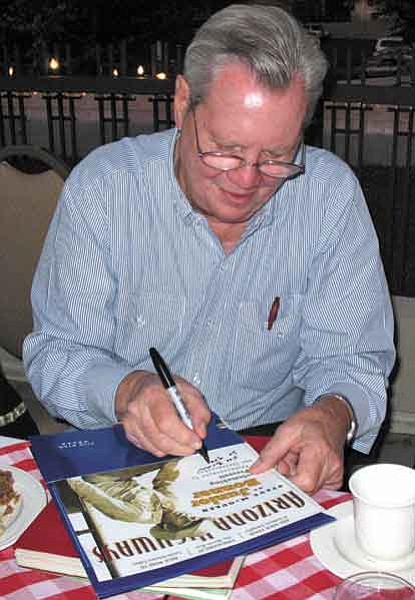 Originally Published: October 5, 2008 11:54 p.m.
Tweet
PRESCOTT - In 1970, ABC Pictures hired aspiring film writer Jeb Rosebrook to write "a rodeo movie." He wrote "Junior Bonner" and made Prescott and its rodeo famous.Rosebrook was the guest of honor this past week for "Junior Bonner, Dinner and a Movie" at the Hassayampa Inn in Prescott. He talked about the film and shared some Hollywood trivia.Prescott's Access 13 Community Television sponsored the event. William "Bill" Pierce, Prescott coordinator for the movie, also attended. After dinner, Rosebrook and Pierce, who had not seen each other since working on the movie, joined guests at the Elks theater for a private showing of the movie.It all started with a telephone call in 1970."My agent called and said Robert Redford wanted to do a Western movie and asked if I had one written," Rosebrook said. He did not. So, he sat down Labor Day weekend, wrote four pages called "Bonner" and sent them to his agent. "I had been to the rodeo that year and I thought that maybe I could write a movie about the rodeo in Prescott," he said, referring to Prescott Frontier Days, the "World's Oldest Rodeo.". ABC Pictures hired him and he wrote the movie between November 1970 and April 1971. Director Sam Peckinpah started filming in June.In 1971, Bill Pierce lived in Prescott. He was chairman of the Rodeo Fair Association and served on Arizona's picture development commission.New Mexico was courting Peckinpah to film there, Pierce said."So, I drove him around Prescott with a copy of the script and he said, 'This is it.'"Most of the crew and cast - including Robert Preston, Ida Lupino, Ben Johnson and Jo Don Baker - rented rooms at the Prescottonian on Gurley Street. McQueen rented a house."I remember McQueen riding his motorcycle all over town," historian Elisabeth Ruffner said.McQueen "hated horses," Pierce said. Cowboy movies usually include a bar fight and the Palace Restaurant and Saloon played host to a whopper.Rosebrook had his screen debut in the Palace fight. "The way that fight worked was that Peckinpah had everybody there by about 8:30 in the morning to start shooting at 10," Rosebrook said. "He opened the bar and everybody had free drinks until about 9:30."Then the band started playing and we started dancing and fighting. That fight lasted almost two weeks."Pierce also debuted in the movie. He played the rodeo official that draws "Sunshine" the bull for McQueen to ride."I watched them rehearse that scene and told Peckinpah they were doing it all wrong," he said. That night, a courier arrived with a note from Peckinpah directing Pierce to report to the set the next morning to play the rodeo official.The film ends with a "Special Thanks to William Pierce.""That was a surprise to me," Pierce said."Bill was the glue that held everything together," Rosebrook said.The film gives viewers a tour of 1970s Prescott. Some of the sites, such as the train station and Smoki pueblos, are gone.Peckinpah talked about filming the movie in another state, Rosebrook said. "But it was decided to film it in Prescott for which I am forever grateful. I wrote this movie for Prescott."Contact the reporter at bcolbert@prescottaz.com
Report a Typo Contact
Sign up for Courier e-News Alerts
Most Read
7 days
30 days