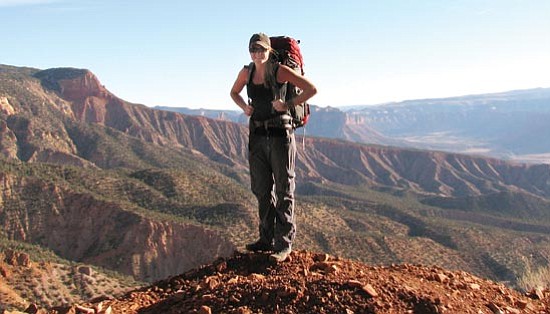 Courtesy<p> Leah Hickman stands on a Colorado peak near the Uncompahgre Plateau and the Dolores River.

Prescott gets pretty cold in the depth of winter, but not quite as chilly as the top of Mount Kilimanjaro.

Leah Hickman, a 2003 Prescott High graduate, will spend most of next January realizing this, as she joins 10 other women from the U.S. and Australia climbing the 19,340-foot mountain, in addition to Mount Meru and Mount Kenya in Africa, to raise money and call attention to health, education and environmental issues on the Dark Continent.

The women will take part in the 3 Peaks in 3 Weeks 2009 Challenge, which the 3 Peaks 3 Weeks non-profit organization sponsors to raise money for three grassroots organizations in Kenya and Tanzania: Support for International Change, The School of St. Jude, and the Laikipia Wildlife Forum.

The organization sponsored a team in 2007 that raised more than $350,000 for the causes and was the subject of a documentary that won Best Adventure Film honors at the Boulder International Film Festival.

Participating team members spend a year before the trip raising money for the causes. All members are responsible for their own expedition costs.

Hickman said the team will meet in Nairobi on Jan. 7, 2009, and start with Kilimanjaro, visiting the organizations between successive climbs.

"In a symbolic way, we're climbing each of those three peaks - Kilimanjaro for education, we're doing Meru for the environment, et cetera," Hickman said by phone from her home in Grand Junction, Colo.

Hickman said fundraising has taken priority over physical conditioning for the trip.

"The whole reason we're doing this is we want to get money and awareness for these key issues. Being able to put funds on the ground and seeing the organizations first-hand is what this is all about," she said, adding that backpacking and running over the summer has helped her stay in shape.

"Growing up in Prescott, always going on backpacking trips, I feel pretty comfortable. Of course, I've never been to 19,000 feet, but I feel I'll be up to the challenge for sure," she said.

Hickman said she has met most of the U.S. team members, and everyone has stayed in contact throughout the year, discussing fundraising, training, gear and travel.

Each member raised money in their own ways, helped in some ways by the success of the documentary, she said.

"I think every girl has her own story. One of the girls on the team raised upwards of $20,000 for 3 Peaks 3 Weeks before she was even on the team, just by doing the Sydney Marathon. She just got her friends to run the marathon and pledge."

Hickman has organized "For the People of Africa: A Documentary and Silent Art Auction" beginning 6 p.m. Friday at the Prescott Adult Center.

Admission is free, and proceeds to the cause depend on donations at the door, bids on artwork and a raffle.

For more information on the organization, visit www.3peaks3weeks.org.