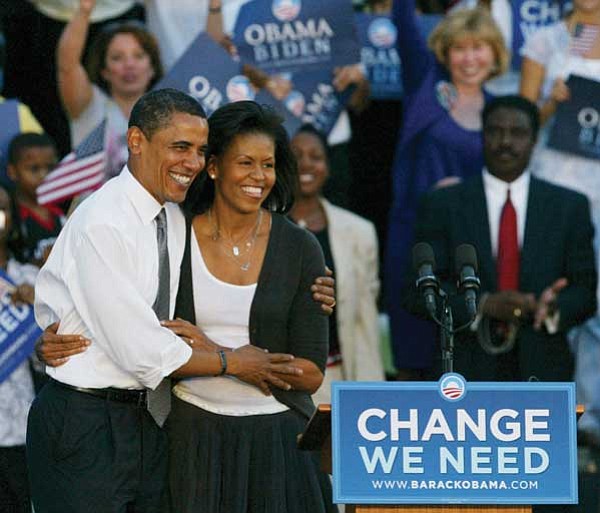 Wilfredo Lee/The Associated Press<p> Barack Obama and his wife Michelle hold each other during a rally in Miami Oct. 21.

WASHINGTON - Barack Obama swept to victory as the nation's first black president Tuesday night in an electoral college landslide that overcame racial barriers as old as America itself.

"Change has come," he told to a huge throng of jubilant supporters.

The son of a black father from Kenya and a white mother from Kansas, the Democratic senator from Illinois sealed his historic triumph by defeating Republican Sen. John McCain in a string of wins in hard-fought battleground states - Ohio, Florida, Virginia, Iowa and more. On a night for Democrats to savor, they not only elected Obama the nation's 44th president but padded their majorities in the House and Senate, and come January will control both the White House and Congress for the first time since 1994.

In his first speech as victor, to thousands at Grant Park in his home town of Chicago, Obama catalogued the challenges ahead. "The greatest of a lifetime," he said, "two wars, a planet in peril, the worst financial crisis in a century. ...There are many who won't agree with every decision or policy I make as president, and we know that government can't solve every problem. But I will always be honest with you about the challenges we face."

McCain called his former rival to concede defeat - and the end of his own 10-year quest for the White House. "The American people have spoken, and spoken clearly," McCain told disappointed supporters in Arizona.

Obama, in his speech, invoked the words of Lincoln and echoed John F. Kennedy.

"So let us summon a new spirit of patriotism, of service and responsibility where each of us resolves to pitch in and work harder," he said.

He and his running mate, Sen. Joseph Biden of Delaware, will take their oaths of office as president and vice president on Jan. 20, 2009.

Obama will move into the Oval Office as leader of a country that is almost certainly in recession, and fighting two long wars, one in Iraq, the other in Afghanistan.

The popular vote was close - 51.3 percent to 47.5 percent with 73 percent of all U.S. precincts counted - but not the count in the Electoral College, where it mattered most.

Obama has said his first order of presidential business will be to tackle the economy. He has also pledged to withdraw most U.S. combat troops from Iraq within 16 months.

A survey of voters leaving polling places on Tuesday showed the economy was by far the top Election Day issue. Six in 10 voters said so, and none of the other top issues - energy, Iraq, terrorism and health care - was picked by more than one in 10.

In Washington, the Democratic leaders of Congress celebrated.

Shortly after midnight in the East, The Associated Press count showed Obama with 338 electoral votes, well over the 270 needed for victory. McCain had 141 after winning states that comprised the normal Republican base.

Interviews with voters suggested that almost six in 10 women were backing Obama nationwide, while men leaned his way by a narrow margin. Just over half of whites supported McCain, giving him a slim advantage in a group that Bush carried overwhelmingly in 2004.

The results of the AP survey were based on a preliminary partial sample of nearly 10,000 voters in Election Day polls and in telephone interviews over the past week for early voters.

At least two Democrats lost their seats. Rep. Tim Mahoney fell after admitting to two extramarital affairs while serving his first term in Florida. In Louisiana, Democratic Rep. Don Cazayoux lost the seat he had won in a special election six months ago.

The resurgent Democrats also elected a governor in one of the nation's traditional bellwether states when Missouri Attorney General Jay Nixon won his race.

A dozen states elected governors, and ballots across the country were dotted with issues ranging from taxes to gay rights.

An estimated 187 million voters were registered, and in an indication of interest in the battle for the White House, 40 million or so had already voted as Election Day dawned.

Obama sought election as one of the youngest presidents, and one of the least experienced in national political affairs.

That wasn't what set the Illinois senator apart, though - neither from his rivals nor from the other men who had served as president since the nation's founding more than two centuries ago. A black man, he confronted a previously unbreakable barrier as he campaigned on twin themes of change and hope in uncertain times.

McCain, a prisoner of war during Vietnam, a generation older than his rival at 72, was making his second try for the White House, following his defeat in the battle for the GOP nomination in 2000.

A conservative, he stressed his maverick's streak. And although a Republican, he did what he could to separate himself from an unpopular president.

For the most part, the two presidential candidates and their running mates, Biden and Republican Gov. Sarah Palin of Alaska, spent weeks campaigning in states that went for Bush four years ago.

McCain and Obama each won contested nominations - the Democrat outdistancing former first lady Hillary Rodham Clinton - and promptly set out to claim the mantle of change.

He also won at least 3 of Nebraska's five electoral votes, with the other two in doubt.