You are getting sleepy, very sleepy... 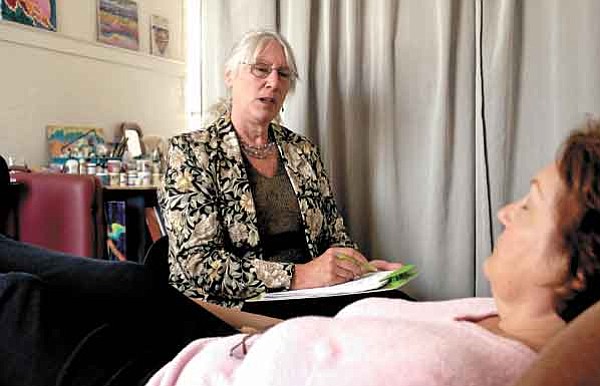 Ever try to get the attention of a young person watching their favorite television show?

That's because they're most likely in a kind of a trance or self-induced hypnotic state.

Hypnosis is nothing more than a trance-like state characterized by extreme suggestibility, relaxation and heightened imagination, according to www.howstuffworks.com.

People use hypnotism nowadays for everything from quitting smoking to losing weight.

Dunn says hypnosis is a self-help technique that reduces stress so people can solve some of their life problems.

"I work to guide people to find their own answers," she said.

Dunn begins by answering any questions her client might have. She works with a recliner, which a client can use or not, depending on their preferences.

"It's nice to have people in a position where they don't have to (physically) support themselves," Dunn said.

She begins talking to the client, suggesting that they give themselves "permission" to relax and be comfortable.

Initially she tries to match her energy and tone of voice with theirs. Then she begins slowing her words and pace down.

"It begins to help them focus on an interior experience rather than what's going on around them," Dunn said.

She continues with a form of progressive relaxation, asking the client to move their attention throughout their body from their head to their toes, continuously inviting them to relax.

By then, she says, the client is usually very comfortable. That's when Dunn begins to count down from five to one, including a different suggestion for relaxation with each number.

By the time she's done counting, the person should be hypnotized and from there they can work on whatever the person's problem is.

Hypnotism allows people to feel uninhibited and relaxed because they've tuned out most of the worries and doubts that normally keep their actions in check, the experts say, although their sense of right and wrong stays firmly in place.

However, they are not "asleep." In fact, they are hyper-aware - but extremely focused.

"It works for many people," Dunn said. "It doesn't work for everybody. If you're sure it's not going to work, you've already hypnotized yourself."