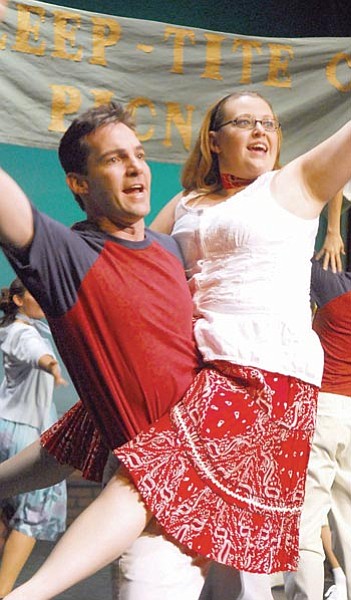 Ahhhh, the 1950s - a period of unbridled optimism and productivity. An age before political correctness, when co-workers might call each other 'honey' and not get reprimanded. A seven-cent-an-hour raise meant all the money in the world, and American workers manufactured textiles.

The Prescott Fine Arts Association visits that era in "The Pajama Game," a comedy musical based on Richard Bissell's novel "7-1/2 Cents."

The show opened on Broadway in 1954, and returned to Broadway in 1973, and again in 2006 with Harry Connick Jr. starring, earning a Tony Award for Best Revival.

Lanning writes in the liner notes that he first saw the play during his first year in college and has been in love with it ever since. "Rock 'n' roll hadn't yet appeared, and all women were wearing dresses. The songs were simple and usually optimistic," he writes.

"The Pajama Game" basically is a musical's musical, with a dozen or more songs in each act.

Songs like "Hernando's Hideaway" and "7-1/2 Cents" became anthems back in the day, Lanning writes.

Bob Fosse made his choreographing debut with the original Broadway production before going on to do the original work for "Chicago," "Cabaret," "All That Jazz" and "Redhead."

Carol Critten, choreographer for this show, auditioned for Fosse in the Broadway run of "Redhead."

The show has a large cast of all ages, rookies as well as veterans, ranging from acting award-winner Joanne Robertson, who last appeared in "Rumors," to students from Lanning's Yavapai College drama class.

The design crew closely replicates the stage set from the 1954 production, with the backdrop of a Midwest factory town.

First-time PFAA performer Barry Barbe plays Sid Sorokin, the eager new superintendent of the Sleep Tite Pajama Factory, for whom all the ladies have the hots.

Robertson plays Babe Williams, the director of the factory's grievance board, and Sorokin's romantic interest.

As the workers unite to conspire against the factory boss, Mr. Hassler (Bill Haas), the story becomes a lesson on why dating co-workers might get tricky when Williams sides with the workers and Sorokin shows little sympathy for their cause.