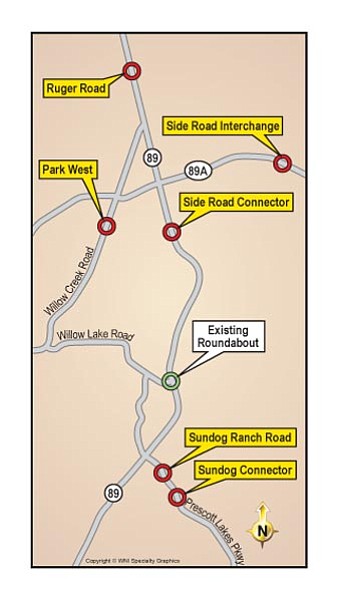 PRESCOTT -  Even as drivers appear to have accepted the area's first modern roundabout at Highway 89 and Willow Lake Road, one question has remained: Is it wide enough?

The Arizona Department of Transportation obviously has taken that concern into consideration. When the state next builds the roundabout in the tri-city area, the design will add about eight feet to the diameter of the configuration.

Arizona Department of Transportation Resident Engineer Alvin Stump reported this week that the new roundabout that will be part of the state's improvements this year at Highway 89/Road 4 South in Chino Valley will be 222 feet in diameter.

That compares with the 214-foot diameter of the Highway 89/Willow Lake Road roundabout that opened to traffic in Prescott in 2006.

Even so, "ADOT is listening to the public concerns about trucks," Stump said. He explained that when trucks traverse the Willow Lake roundabout, they sometimes track over both lanes, which causes concerns for other vehicles in the roundabout.

While Stump said truck and vehicle drivers could make adjustments to deal with the situation, he added, "Basically, we did listen to the concerns and did some work on Road 4 South, so a 53-foot trailer could actually stay in its own lane."

At the same time, Stump said ADOT is mindful of one of the main benefits of roundabouts: a reduction of speed.

While adjusting size, Stump said designers must be careful to retain the "self-enforcing geometry" that leads drivers to slow down considerably when approaching a roundabout. Officials have long pointed out that one of the main safety advantages of roundabouts over traffic signals relates to the lower driving speeds.

Along with the Road 4 South plans, other roundabouts in the works in the Prescott area include:

• Highway 89 and a realigned Ruger Road.

• Highway 89 and the future Side Road connector (near the Phippen Museum).

• Highway 89A and the future Side Road interchange.

In addition, ADOT and local governments plan a number of controlled-access interchanges on Highway 89A.