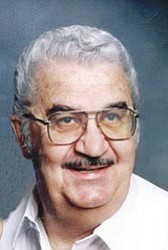 Vince retired in 1982 as the operations manager of KTAR. He had also had a successful career with Ford Motor Company and PaperMate. Vince and Anne moved to Prescott in 1985 and enjoyed retirement together at their "little cabin in the sky." He was a member of Sacred Heart Catholic Church and the DAV. He enjoyed music, especially jazz, reading, sailing and sports. He was proud of his service to his country during WW II and the Korean Conflict, in the United States Navy as a Chief Petty Officer; but in his own words, he was proudest of "the way my five children turned out."

Vince is survived by his loving wife, Anne, of almost 60 years - they were married Sept. 25, 1948; sons Vincent Jr. (Vicki), Steve (Barbara), Charles (Teresa), and Tony (Laura); daughter Anne Johnson; 10 grandchildren and six great-grandchildren. His sister, Jo Scully, also survives him. He will be greatly missed by all those who loved him, but we take solace in the fact that we will be reunited with him through Jesus Christ when we reach His Kingdom.

A Rosary will be at 4 p.m. Saturday, May 10, 2008, at the Arizona Ruffner Wakelin Funeral Home, corner of Cortez and Carleton, with visitation one hour prior.

You are invited to log onto www.ruffnerwakelin.com to view a tribute to him and to sign Vince's guest book, and share a memory with the family.