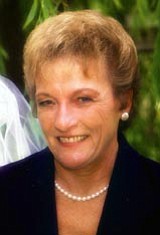 Dorothy "Dottie" Juanita Rarick Whalen passed away Friday, March 28, 2008, in Prescott, Ariz., after a long battle with cancer. She was born on Dec. 22, 1937, to Charles and Lena Rarick in Carlock, Ill., and graduated from El Paso High School, in El Paso, Ill.

Services will be Wednesday, April 2, 2008, at 10 a.m. at Sacred Heart Catholic Church where Dottie was a member for 24 years.

She is survived by a loving family, Michael B. Whalen who she married on May 24, 1958, in Bloomington, Ill. They have four children, Mark (Vickie) Whalen, Shelly (Jerry) Harpenau, Mindy Whalen, David (Isabel) Tabor; six grandchildren, Matthew Whalen, Riley Whalen, Baylee Whalen, Laci Harpenau, Julianna Tabor, Karla Tabor; and a brother, Frank (Carolyn) Rarick. Dottie was blessed with many loving family members and friends over her 70 years.

She was preceded in death by her mother and father; a sister, Charlene Smith; and a brother, Joseph VanDeventer.

In lieu of flowers, the family requests donations be made to Hospice Family Services, Prescott, Ariz.