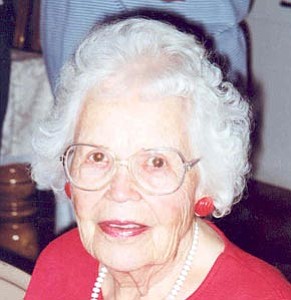 She was a beloved wife, mother, grandmother, great-grandmother, daughter, aunt, sister and friend. Her husbands, Everett Lee Goodman, father of her eight children, Merle M. Allen and son Larry Dean Goodman have preceded her in death.

In 1957 her husband Everett passed away, leaving Opal a widow with seven unmarried children. In July of 1960, Opal married Merle M. Allen of Prescott and has resided there for 48 years.

Opal has served as a Republican Precinct Committeeperson for 65 years. She is

known as the "Mother of Yavapai College" in Prescott for her diligent work in its foundation. She was State PTA President and was devoted to her community and country. She has held various leadership positions in the Church of Jesus Christ of Latter-day Saints, and loved serving others. Opal was a resident of the Arizona Pioneers' Home at the time of her passing.

Opal has left an indelible legacy and will be greatly missed. She will always be remembered for her unwavering faith in God, her love of family and her patriotism. She walked the talk of a positive mental attitude.