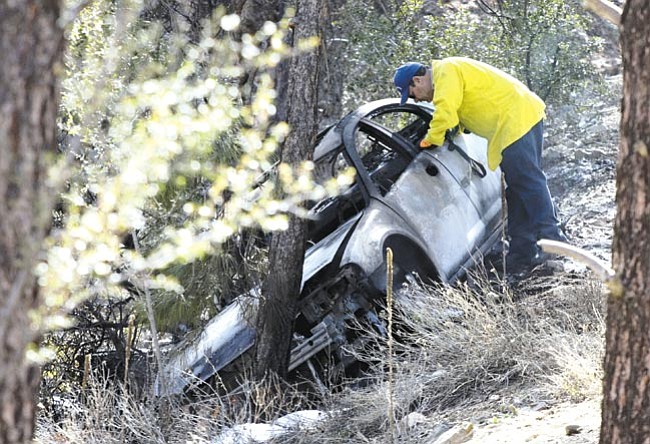 The Daily Courier/Les Stukenberg<br> Central Yavapai Fire Marshal Charlie Cook looks into the burned vehicle that holds the remains of a woman. The single-vehicle accident happened in the Highland Pines subdivision northwest of Prescott Wednesday afternoon.

A Highland Pines woman died when her vehicle slid off an embankment and caught on fire in the area of Pinion Pine Road shortly before 2 p.m. Wednesday.

"She missed the corner coming out of her driveway and a neighbor heard the crash," according to Deputy Scott Joy, Yavapai County Sheriff's Office. "The neighbor tried to help her, but she was wedged down in her car. Then the car became fully engulfed in flames."

Pending the autopsy, Joy said the cause of death is severe burns. The sheriff's office is not releasing the name of the woman until they notify her family.

"When we got the call, we dispatched every unit because of all the trees and vegetation in this area," said Fire Investigator Charlie Cook, Central Yavapai Fire District. "We could see the smoke from town and went overkill on the response. We got the fire under control within five minutes, but the fire spread about an eighth of an acre out to the vegetation."

The woman was driving a newer model Dodge Stratus, which rolled over onto the passenger side.

"We can't do anymore until the wrecker gets here, but it looks like the fire was a result of the motor or front tire under the car - possibly the gas line or a punctured tire caused a spark," Cook speculated. "But it did start in the engine compartment."

The neighbor made a valiant attempt to help the woman, Cook added. "He received burns to his hand, which we treated at the scene."