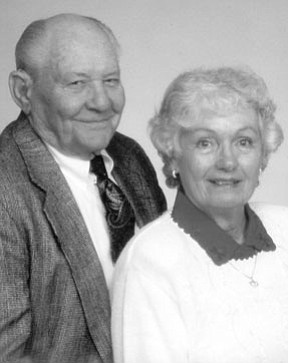 Mary Ann and Jimmie Webb have been married for 65 years

Jimmie, originally from Stover Mo., the fifth child of 10, enlisted in the Army in 1941 and served in Panama during the war.

He was stationed in Oceanside, Calif., when he met Mary Ann. It was love at first sight.

They married in 1943 and were blessed with five children who they raised in San Diego. They are: Janet (Darryl) Anderson of Prescott Valley, Linda (David) Hack of Prescott Valley, Ron (Debi) Webb of Hudson, Mass., Carol Webb-Braden of Beatty, Nev. and Kenneth (Shirl) Webb of Ft. Pierce, Fla.

Jimmie and Mary Ann are also blessed with 14 grandchildren,

Following in his great-grandfather's footstep's, Joshua Arfsten is in the Army, currently serving in Iraq.

After Jimmie received his discharge from the U.S. Army as Tech. Sergeant, he went to

He retired in 1974 as supervisor of transportation after 35 years of combined service.

A few years after retirement, Jimmie and Mary Ann moved to Yuma, and eventually back to Jimmie's home state of Missouri.

In 2004, they moved to Prescott Valley to be closer to family.

Mary Ann celebrated her 81 birthday this past September and Jimmie turned 89 in January.

He still manages to get in his one-mile walk, five days a week.

They enjoy living in the Prescott area, supporting its local restaurants by eating out several times a week and living near two of their daughters.