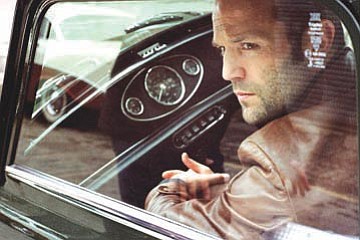 Plot: Terry Leather (Statham) is a shady used-car dealer with a past who's tried to get away from the world of crime in order to support his family. When Martine Love (Burrows) comes to him with a seemingly foolproof plan to rob the safety deposit boxes of a major London bank, Leather decides to do one last job.

Leather gets together his old crew and they begin to plan the elaborate heist. They rent a store near the bank and begin to drill through to the basement area where safe deposit boxes house untold wealth. The gang pulls off the heist - but, in addition to wealthy and jewelry, the safety deposit boxes contain some very dangerous items - scandalous photos of members of the royal family, powerful politicians engaging in sexually deviant acts and the ledger of a major pornography king, detailing every bribe he has given to every crooked cop in London.

These put them in the crosshairs of some of the most dangerous people in the country, who, along with the authorities, also work to track the bank robbers down. Leather and his crew have to struggle against the many groups that want them dead, trying to hang onto their loot... and their lives.

Star Player: Richard Lintern as Tim Everett. Everett is an MI-5 agent who seems to be an ironic James Bond homage. Everett pulls the strings behind the scenes to accomplish the work of his government, resorting to emotional manipulation, threats and blackmail. Lintern portrays Everett as unflappable, cool-headed and ultimately ruthless, but with a heart for those near and dear to him, and a strong since of justice.

My Take: Heist movies can be very hit and miss, but overall, "The Bank Job" is a solid film, largely because it goes above and beyond the heist, into a conspiracy story that pits the protagonists against corrupt cops, crime lords, the police and the government.

The robbery itself is entertaining enough, though it showcases many conventions of the genre. The movie really takes off when Statham begins to bluff, cut deals and pit his enemies against each other. It is not an action movie by any means - though Statham has one entertaining fight scene - but it does provide steady dramatic tension.

The 1970s London setting is entertaining, though at a few points it does seem as if the movie fills time with showcasing the "look how different things were then" angle.

Statham and his crew all portray entertaining "lovable villains," but unfortunately it seems as if rather than playing an original and vital character, Statham is reiterating his stock character.

Fortunately, this is better than several of Statham's other recent movies, and much of the star's charisma comes through.

Overall, "The Bank Job" isn't an amazingly unique or special film, but it is highly entertaining and well paced, with a good sense of direction and energy to it.

On a final note, the movie is "based on true events." There was a robbery akin to the one portrayed in the movie, and the British government did hush it up, indicating there might be extenuating factors, but much of the movie's plot is pure imagination. At least it is an entertaining imagining - all a viewer could ask of any movie.

Stars: Three out of five.

'The Italian Job' low on violence, high on entertaining action<BR>
Movie Review: 'The Meg' takes the science out of sci-fi
Review: Shark thriller 'The Meg' goes deep, stays shallow
‘First Man’ a dramatization of the moon landing, lacks the patriotism
At the Movies: March 14