Blog: Got gas? Who's to blame for high prices? 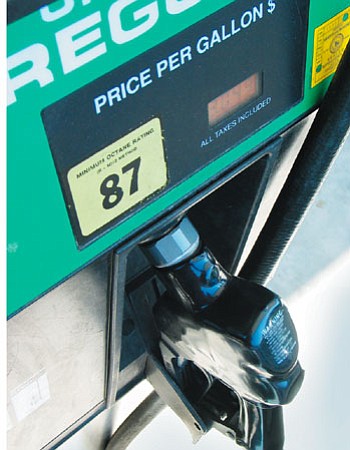 Gasoline prices are going through the roof because of global warming. At least that's the opinion of the Informed Voters of America.

The group also blames: war, and its casualties; elections, and how much money we're spending on them; and the economy's slump, as it relates to farming.

They forgot to blame termites and the City Council. Go figure!

Other folks blame: George W. Bush - "because he's mad" at the liberals; the liberals, who "won't let us pump our own oil (in Alaska) or build nuclear power plants or even get all the coal" we have; environmentalists - "Cuba is drilling off the coast of Florida but we can't due to environmental" concerns; inflation - "Every time the Federal Reserve prints money, the money we have already is less in value," causing prices to rise; supply and demand - "Vehicles, gasoline, diesel, make up, planes, clothing, plastic products, chemicals, and roads are products of oil. Even the computer and keyboard in front of you is made from oil. This demand for goods causes prices to go" either up or down; and tourism - because the travel season is coming.

A LITTLE CLOSER TO REALITY and kidding aside, the cost of filling up the family car climbed to a record high Tuesday, adding to the challenges consumers already face with falling home values and rising food prices. Gas prices at the pump rose overnight to a record national average of $3.2272 a gallon, according to AAA and the Oil Price Information Service. That's a tad higher than the previous record of $3.2265, from May 2007.

The fact is on Tuesday, light sweet crude for April delivery surged to a new trading record of $109.72 on the New York Mercantile Exchange before retreating after the Energy Department and International Energy Agency cut crude consumption forecasts for this year. Futures settled 85 cents higher at $108.75 a barrel, a new record, according to the Associated Press.

Experts attribute that to greedy oil sheiks in the Middle East. I say include in that the oil companies (they posted billions of dollars in profits last year, while the rest of us tightened our belts).

WHERE GAS AND OIL go from here is anybody's guess. Over the weekend, I filled up my wife's car for $3.04 per gallon (unleaded at Woody's - Iron Springs Road) and my truck for $3.69 per gallon (diesel - Safeway in Chino Valley, including Safeway's 10-cent discount). In my quest for those fairly low prices, I passed on unleaded that was $3.06 (Express Stop - near Frontier Village), and diesel at $3.83 (Petro - Chino Valley) and something in the neighborhood of $3.93 (Old Stage Stop - Williamson Valley).

Analysts predict that the price of oil could keep rising to $120 a barrel, or higher. And with demand for gas expected to rise as warm weather arrives, analysts say pump prices could spike as high as $3.75 a gallon for unleaded, regardless of what happens with oil prices.

I say get ready for nearly $4 per gallon here for unleaded and $4.50 or more (God, help me!) for diesel. What do you think? What's driving the prices higher? Where are you finding the deals?

Just don't say it's because of global warming, thank you.