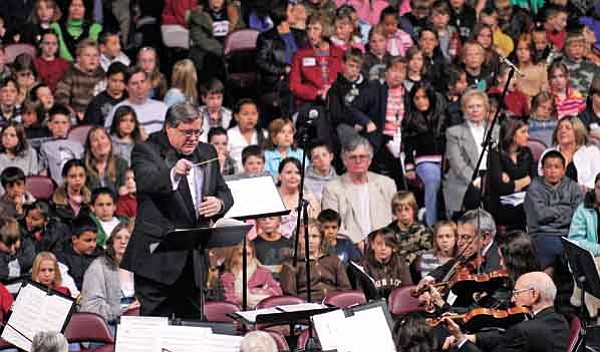 Packing 3,500 kids into Tim's Toyota Center for a classical music concert on a weekday morning might sound like a challenge.

Wednesday's concert for Yavapai County grade school students went off without a hitch, however, and the kids' enthusiastic reception of the music topped off an endeavor organizers say was more than a year in the making.

"You may not know, but you are making history together," Yavapai Symphony Guild President Carol Friedman said at the start of the concert. The 60-something member Prescott Pops Symphony Orchestra, which played popular movie scores and selections from Aaron Copeland, Reinhold Gliére and other composers, was performing at Tim's Toyota Center for the first time.

The Pops also performed for the first time as the orchestra for the annual concert for the Yavapai Symphony Guild-sponsored Music Memory program, in which third-through fifth-graders learn about classical music instruments, compositions and concert etiquette from program volunteers before attending the concert.

"I was crying. I was so emotional. The kids were so well-behaved. It was beautiful," Prescott Pops Symphony President Paul Baskin said, adding that all the organizers involved will try to make the concert an annual event.

Baskin said he believes the program sparks the students' interest in music and unlocks their general cognitive potential.

"There's a cause and effect to music," he said.

After performing "Also Sprach Zarathustra," which most people recognize as the theme to "2001: A Space Odyssey," Coyote Springs Elementary music teacher Dave Newman introduced the orchestra by having the different sections, such as piccolo, bells and French horns, perform two measures of "a dorky piece that I wrote called 'Twinkle Twinkle Little Star,'" before conductor Paul Manz led the orchestra through the theme of "Pirates of the Carribean."

Manz elaborated on the significance of other pieces, such as how Copeland incorporated American folk elements into his music, as in "Variations of a Shaker Melody," and how Gliére's "Russian Sailor's Dance" demonstrated changes in tempo and tonality.

Lincoln Elementary fifth-grader Andrew Lawhead said his favorite part of the concert was a medley of Beach Boys songs the Pops played because "it's up-tempo."

Morgan said the Music Memory program taught her "how to listen and how to pay attention."

Coyote Springs Elementary fourth-grader Amy Lequesne particularly enjoyed the selection from "Pirates of the Caribbean" because it "sounded really cool."

"I could hear the piccolo, and the trombone, and all the brass section," she said.