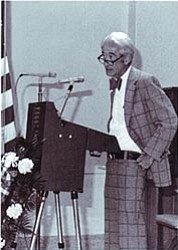 Dr. Lepperd was born to Dr. F.C. and Lydia (Weigel) Lepperd Sr. on Jan. 28, 1926, in West York, Pa. He attended medical school in Pennsylvania and followed the footsteps of his father in private practice for several years in Hanover, Pa.

He is survived by two daughters, Kristen (Steven) Weisman of Milwaukee, Wis., and Lisa Cottrell (Juan) of Neptune City, N.J.; a stepdaughter, Michele Lepperd Stock (Rick) of Taylor, Ariz.; seven grandchildren and step-grandchildren; a nephew, Kit Henderson of Sheridan, Wyo., and a niece, Sarah Henderson of Austin, Texas. He was preceded in death by his parents and his younger sister, Susie Henderson.

Besides his love of and dedication to the field of medicine and hospital administration, Dr. Lepperd loved to garden and cook. He also found great satisfaction and delight in traveling the outback country searching for artifacts.