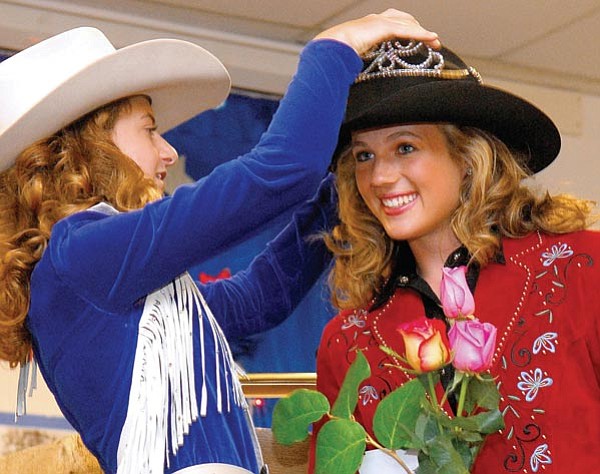 That's because the winners of the pageant's queen, senior court and junior court competitions are chosen a full year before they reign. The young ladies chosen this year won't reign until July 5, 2009. Until then, they'll be ladies in waiting.

To the uninitiated, it does get confusing, admitted Raenell Killian, assistant chairman of the Rodeo Royalty Pageant, who spoke with the Daily Courier moments before the announcement of the 2009 winners.

Prescott does its rodeo queen pageant differently than most other rodeos, Killian explained. Most rodeos choose their rodeo queen as part of that year's rodeo.

Prescott, on the other hand, chooses its rodeo queen and her court the year before they are to reign. That gives them a full year to learn the ropes by shadowing their counterparts.

Adding even more confusion to the mix, in 2007 - when the 2008 queen and her court were chosen - no one applied for queen or senior court.

Learning the ropes won't be a problem for 2009 Queen Jordan Anderson. That's because she served as the 2005 junior court and the 2007 senior court, so she pretty much knows what her duties are.

The fact that she was the only competitor for the 2009 contest doesn't make her win any less sweet, the 18-year-old said, because she still had to earn enough points to win in all of the competition categories, like horsemanship and public speaking.

Competing, even against yourself, is hard - but rewarding - work, she said.

"It helps you in so many ways and you learn things about yourself," Jordan said.

Jordan's sister Alex, 15, won the senior court contest Sunday out of a field of three contestants.

"Our job is as ambassadors of the rodeo," Alex said. To help them prepare for the contest, they had to study a thick book of rodeo facts.

"We can't tell people about it if we don't know about it," Alex added.

For example, she said, during one of the competitions the judges asked her about a "stripping chute."

Thankfully she knew that a stripping chute is where the cows go to have the ropes removed that the cowboys have thrown around them.

Bailey, 14, said this year is the first time she's ever competed in the rodeo royalty contest.

Killian said she thinks part of the problem in recruiting contestants is that Prescott is changing.

There also might be a timing problem because the applications for the contest go out in January, Killian said.

"We're trying to do a better job of getting the word out," she added.