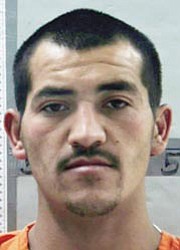 A 7-year-old Prescott Valley boy is in stable condition in the intensive care unit of St. Joseph's Hospital in Phoenix after a Prescott Valley man hit him while the boy was riding a bicycle Friday evening.

Yavapai County Sheriff's deputies arrested Jose Rivera-Garcia, 23, on charges of suspicion of driving under the influence, aggravated assault, failure to stop at an injury accident scene, endangerment and intentional injury to another.

Rivera-Garcia's car struck the boy at 7 p.m. near Knights Way and Treasure Drive in the Castle Canyon Mesa area of Prescott Valley. He dragged the boy's bike under his car as he kept driving.

Witnesses followed Rivera-Garcia to a home on Jester Circle Drive and pointed out the location to arriving deputies. They found out that Garcia had removed the boy's bike from underneath his vehicle and taken the time to hide the bike on the property.

People who saw the accident and have yet to contact the Sheriff's Office should call Det. Mike Poling or Det. Steve Surak at 771-3260.