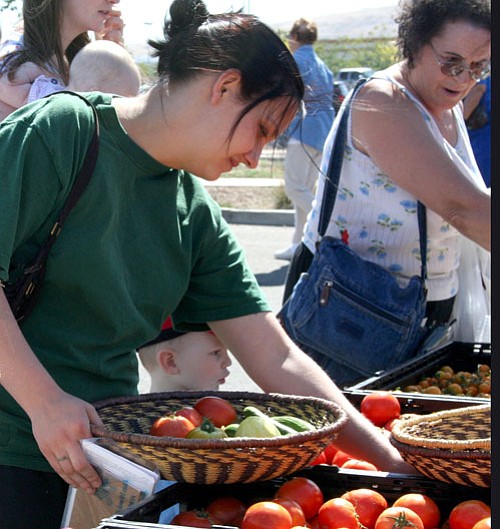 Trib Photo/Sue Tone<br> The first shoppers of the season look over fresh produce at the Chino Valley Farms stand Wednesday at the Prescott Valley Farmers Market. Michael O’Connor was offering heirloom tomatoes at a special price of $2.50 per pound, usually a dollar more per pound. He also carries large green tomatoes for some of his regular customers who like to fry them up for dinner.

Erin Lingo, Prescott Farmers Market manager, said she expects 12-15 vendors to set up at the Prescott Valley market, although the first day this Wednesday started out a little slow. Lingo thought maybe that was due to the strong winds.

"I was amazed at how many customers were here right at 3, wanting to buy produce," she said.

The Prescott Valley Farmers Market operates out of the M&I Bank parking lot on the corner of Glassford Hill and Florentine every Wednesday from 3-6 p.m.

The high price of gasoline is causing higher food prices at the supermarkets, and more people are considering buying locally, Lingo said. This pleases her because the average produce travels 1,500 miles to get into stores, she said.

Vendors appeared to be doing well on Wednesday. In fact, Tom Reilly wondered out loud if he would sell out of his grass-fed, 100 percent natural beef.

Jane Carlson, looking over the list of cuts of meats, asked her husband Roy if he wanted short ribs or fajita.

"I'll eat whatever you cook," Roy said with a laugh.

T.S. Ranches is located in Paulden, and Reilly said he does not use hormones, supplements or antibiotics.

Whipstone Farms, also in Paulden, kept their produce fresh in the dry air by misting with water. Winds made it difficult to set up the tent, said workers Tracy Lee and Zane Kozierachi. They offered slices of fresh, raw turnip, unexpectedly sweet, for shoppers to snack on.

Da Nede Farms from Camp Verde is in its first year, said owner Freddy Munoz. He said he is still learning about farming, having planted some crops too early in the season or too deep.

He sells a pound of fresh garlic for $3.50 per pound, and several types of onions.

He also has large scrubbed and unscrubbed gourds for sale. These are popular with artists who use them to decorate.

Terra Verde Farms returned with their stock of preserves, marinades, condiments and salsa.

Owners Sandi and High Sabel started out as organic farmers in Texas and began their Artisan Food line as a way to use up the "uglies," the market leftovers. Late spring freezes in 2002 and 2003 contributed to their selling the farm and moving to Phoenix.

The Sabels continue to use vine-ripened fruit and fresh vegetables in their products, using no artificial flavorings, preservatives or colors.

Those seeking more information may call 713-1227 or visit www.prescottfarmersmarket.org.