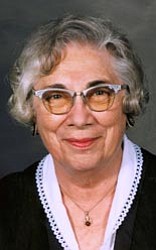 Hazel Moore Osborne Humphries, 90, of Upland, Calif., went home to be with the Lord on July 23, 2008, at the Upland Rehabilitation and Care Center.

She graduated from Lake Erie College in Ohio in 1941 and the Palmer School of Chiropractic in 1948. She practiced chiropractic with her husband, Jarvis Osborne, for eight years in Ohio and was a schoolteacher in Ohio and California for over 24 years. She lived in Chino, Calif., for 19 years and retired in Prescott, Ariz., for 27 years. She was a member of the First Southern Baptist Church. She lived in Upland for five years.

She was a World War II Navy veteran providing physiotherapy to the wounded at the USNH at Mare Island in San Francisco.

Graveside ceremonies and interment will be at Riverside National Cemetery, Riverside, Calif.