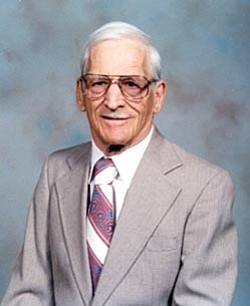 Elmer Francis Cold, 93, died Sunday, July 20, 2008, at the Bob Stump VA Medical Center in Prescott, Ariz. He passed away peacefully surrounded by his wife and children.

He was born Nov. 16, 1914, in Revelstoke, British Columbia, Canada, the son of Peter Christiansen and Frances Joanna (Vifquain) Cold. He was naturalized as a United States citizen with his parents when he was two years old. Elmer lost his father as he and his twin sister Marie were graduating from high school. They both remained with their mother for a time helping her with the farm work and three younger siblings.

Elmer served his country in the United States Army during World War II from July 1941 to September 1945. After a three-year courtship, he and Alice Margaret Atkinson were married March 31, 1942, in Orange, Calif., where he was stationed before shipping out to Kodiak Island, Alaska.

After Elmer's honorable discharge, he and Alice spent time replacing his mother's farmhouse that had burned down while he was away. Five years later they moved to a ranch in Montana. After two drought years they settled in Lewistown, Mont., which was home for 50 years until they moved to their present home in Chino Valley, Ariz., in 1999.

Elmer's working years were spent in farming, ranching, construction and sales. His last position was a state appointment as vendor of the Montana State Liquor Store in Lewistown. Elmer was an avid gardener and was always attracted to horses. After retirement, he enjoyed training Arabians and often rode in parades. He had a wonderful sense of humor, which he retained to the last, even while being disabled the last 13 years of his life. Elmer was always ready to help anyone he would see in need.

Elmer was a member of St. Catherine Laboure Catholic Church, Knights of Columbus in Chino Valley, and a life member of the Disabled American Veterans.

Viewing will be 4 p.m. Friday, July 25, 2008, at the Hampton Funeral Home, 240 South Cortez, Prescott, Ariz. Rosary to follow at 6 p.m. A celebration of Mass of Christian burial will be 1:30 p.m. Saturday, July 26, 2008, at St. Catherine Laboure Catholic Church, Chino Valley, Ariz., with internment at the Chino Valley Cemetery to follow.