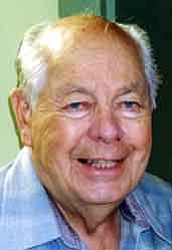 Frank Earl Miller, Capt. USN, (Ret.) passed away peacefully at home on July 13, 2008, in Prescott, Ariz. Earl was born to Frank B. Miller and Clara D. Miller on May 11, 1918, in Froelich, Clayton County, Iowa. He lived on a farm at Beulah, Iowa, until the age of 7, when his family moved to the village of Giard, Iowa. His father was a carpenter and a builder.

Earl attended elementary school in Giard Township and high school at Monona, Iowa, where he graduated in 1935. He then attended Iowa State Teachers College where he obtained a Bachelors of Arts in chemistry in 1939.

He worked as a laboratory assistant at Iowa State Teachers College in 1939 and 1940 and was employed by John Deere Tractor Company at Waterloo, Iowa, as a metals chemist in 1940 and 1941. He entered the Navy at Minneapolis, Wold-Chamberlain Field, in March 1941 and received his wings and commission at Corpus Christi, Texas, in March 1941. On June 7, 1942, at Corpus Christi, Texas, he was united in marriage to Virginia Ann Knostman, daughter of George and Clara Knostman, of Davenport, Iowa.

He retired in June 1972 after 31 years of service and moved to Prescott, Ariz., where he was active in the Prescott Military Pilots organization and the Military Officers Association of America. He was also a member of the Prescott Lions Club; the Prescott Sportsman's Club and the National Rifle Association and enjoyed hunting. Earl and Virginia spent many happy hours fishing.

There will be no services but friends are invited to call on Virginia.