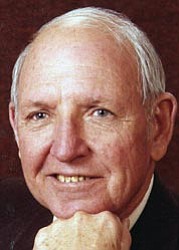 Lee Roy Gudgel, 88, passed away peacefully Wednesday, July 10, 2008. Lee Roy was born Nov. 16, 1919, in Boggy Depot, Okla. He had many memories of the migration of so many Oklahoma farmers to California during the Dust Bowl era. His family was among the more fortunate in that their new farm and dairy in the San Joaquin Valley eventually thrived.

After college and a brief stint with Bank of America, Lee Roy entered World War II as an Army Air Force pilot. One year later, he married Raydene Hicks and finished his tour of duty in the Arizona desert where he instructed American commandos. The couple returned to California and the farming life in 1946, but three years later Lee Roy sensed a change was necessary. He accepted a position with the Anderson Clayton Co., and remained with the firm for 35 years working from the Chowchilla Mill as district manager, and then the last five years were spent in the headquarters office in Phoenix. Although having retired twice (from the Air Force as a major and from Anderson Clayton as an executive), Lee Roy started a third enterprise - residential real estate - working with his daughter and son-in-law, Cheryl and Neil Prill. Lee Roy and Raydene moved to the Prescott Country Club in 1984 where they remained for about 20 years. Lee Roy's love for his church community led him to work on the building committee for the First Southern Baptist Church of Prescott Valley. He served as Deacon and Bible teacher in his church in Chowchilla, Calif., and at North Phoenix Baptist Church and in Prescott Valley as well. He was a faithful member of the Lions Club and The Gideon Society. Lee Roy loved flying, rock hounding, lapidary, trout fishing and the great outdoors in general.

He is survived by his daughter Cheryl Prill of Prescott; son Rex Gudgel of Athens, Ga.; and grandson Shannon Gudgel of Mt. Shasta, Calif. His family wishes to especially thank the Prescott Valley Good Samaritan Center for the loving care that was given him these last months.

Memorial and burial services are taking place in California.

Remembrances may be given in Lee Roy's name to The Gideons or to the Good Samaritan in Prescott Valley.