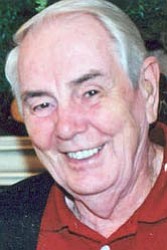 Jack graduated from Minster High School in Ohio and was a veteran of the U.S. Army during WWII. He worked for and retired from the National Cash Register Company (NCR) in Dayton, Ohio, before moving his family to Arizona. In Arizona, he worked for Data Systems of Arizona for more than 10 years. His hobbies included golf and card playing.